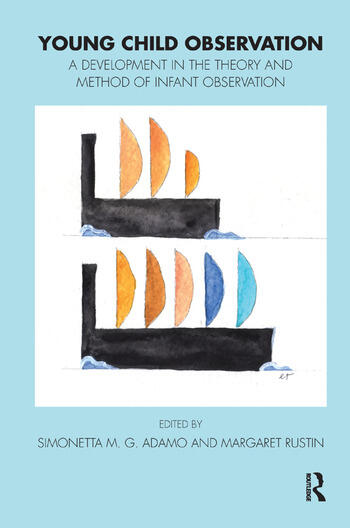 Young Child Observation: A Development in the Theory and Method of Infant Observation

Observing young children at play is an everyday and often fascinating and pleasurable experience for many of us. It also has a great pedigree in the development of psychoanalysis from Freud's observation of his grandson's game with the cotton-reel onwards. This book describes the practice of observing young children in home and nursery settings in a systematic and non-intrusive way in order to expand our understanding of their emotional, cognitive, and social development. It uses a psychoanalytic lens to enrich the meaning of what is seen. How do minds and personalities take shape? How can we train people to see what is most relevant in helping children to develop? The chapters range from classic papers by famous practitioners of an older generation to observations completed in recent years in the UK, Europe, and the US. Observation of this sort has also spread to Latin America, India, Australia, Africa, and the Far East. The differences and continuities with Infant Observation are the starting point.

Series Editor’s Preface -- Introduction -- Developmental issues -- The transition from home to nursery school -- The story of child development: a psychoanalytic account -- Oedipal anxieties, the birth of a second baby, and the role of the observer -- The Young Child Observation seminar: new steps in developing the observer role -- Observing in the home -- An observation of a young Asian child with feeding difficulties, conceived via assisted reproductive technology -- Laurie and his cars: a 3-year-old begins to separate -- The day Captain Antonio’s balloon burst -- The observed child, the observing child: the complexity of a child’s response to the stillbirth of a sibling -- Observing in a nursery -- The work of playing: a male observer gets to know a little boy whose father is absent -- Seeing beneath the surface: an observer’s encounter with a child’s struggle to find herself at nursery -- Thoughts on transitions between cultures: Jonathon moves from home to school and from class to class -- “The house is a boat”: a group of children face separation -- Applications -- Sewing on a shadow: acquiring dimensionality in a participant observation -- A participant observation with a boy suffering from a chronic illness -- Thomas the Tank Engine and Friends: familiar faces in an uncertain world -- Research -- Now we are two, going on three: triadic thinking and its link with development in the context of Young Child Observations -- Young Child Observation used as a research tool: investigating toddlers’ development in day care nurseries -- Young children’s relationships with staff and peers in nursery: observations of two girls aged 29 months and 25 months -- Epilogue