Women in Europe between the Wars
Politics, Culture and Society 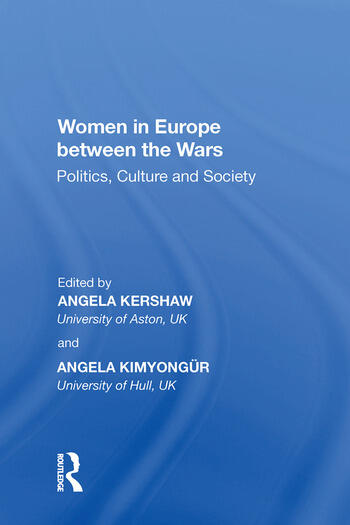 Women in Europe between the Wars: Politics, Culture and Society

The central aim of this interdisciplinary book is to make visible the intentionality behind the 'forgetting' of European women's contributions during the period between the two world wars in the context of politics, culture and society. It also seeks to record and analyse women's agency in the construction and reconstruction of Europe and its nation states after the First World War, and thus to articulate ways in which the writing of women's history necessarily entails the rewriting of everyone's history. By showing that the erasure of women's texts from literary and cultural history was not accidental but was ideologically motivated, the essays explicitly and implicitly contribute to debates surrounding canon formation. Other important topics are women's political activism during the period, antifascism, the contributions made by female journalists, the politics of literary production, genre, women's relationship with and contributions to the avant-garde, women's professional lives, and women's involvement in voluntary associations. In bringing together the work of scholars whose fields of expertise are diverse but whose interests converge on the inter-war period, the volume invites readers to make connections and comparisons across the whole spectrum of women's political, social, and cultural activities throughout Europe.

Contents: Women in Europe between the wars: a culture of contradictions, Angela Kershaw and Angela Kimyongür. Part I 'The Spectacle of Europe': Women Writers and European Politics: 'The spectacle of Europe': politics, PEN and prose fiction: the work of Storm Jameson in the inter-war years, Jennifer Birkett; 'Less than a whisper raised against the massed music': British women writers address 1930s fascism, Mary Anne Schofield; Women's writing and the creation of political subjectivities in inter-war France. Louise Weiss: novelist, autobiographer and journalist, Angela Kershaw; Four years in Paris: Victoria Kent, a Spanish politician in exile, Lesley Twomey; Tales of the runaway countess: gender and politics in Hermynia zur Mühlen's literature for girls, Ailsa Wallace. Part II 'Is Anybody Listening?': Renegotiating the Cultural Canon: Is anybody listening? Dutch women writers between the wars, Jane Fenoulhet; Women and culture in fascist Italy, Sharon Wood; Bodies of discomfort: Mina Loy, the futurists and feminism in Italy between the wars, Laura Scuriatti; Women between the wars: new geographies of cultural diversity, Martine Antle. Part III 'Women and the Public Sphere': Women's Professional and Voluntary Work: Jewish intellectual women and the public sphere in inter-war Vienna, Lisa Silverman; Germaine Dulac and the French film industry between the wars: modernising the 'news-real', Tami Williams; Conducting and empowerment: music-making in the Women's Institute during the inter-war years, Lorna Gibson; Women and their professions in the inter-war period in the Ukrainian Soviet socialist republic, Yevgeniya Dodina; Notes on contributors; Index.

Angela Kimyongur is Senior Lecturer in French/Director of Research, Faculty of Arts, Cultures and Education at University of Hull.