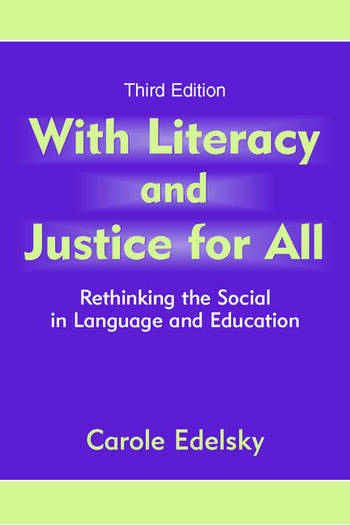 With Literacy and Justice for All: Rethinking the Social in Language and Education

The third edition of With Literacy and Justice for All: Rethinking the Social in Language and Education continues to document Carole Edelsky's long involvement with socially critical, holistic approaches to the everyday problems and possibilities facing teachers of language and literacy. This book helps education professionals understand the educational/societal situations they are dealing with, and literacy instruction and second language learning in particular contexts. Edelsky does not offer simplistic pedagogical formulas, but rather, progressively works through differences and tensions in the discourses and practices of sociolinguistics, bilingual education, whole language, and critical pedagogy--fields whose practitioners and advocates too often work in isolation from each other and, at times, at cross purposes.

In this edition, what Edelsky means by rethinking is improving and extending her own views, while at the same time demonstrating that such rethinking always occurs in the light of history. The volume includes a completely new Introduction and two entirely new chapters: one on reconceptualizing literacy learning as second language learning, and another on taking a historical view of responses to standardized testing. Throughout, in updating the volume, Edelsky uses a variety of structural styles to note contrasts in her views across time and to make the distinction clear between the original material and the current additions. This edition is a rare example of a scholarly owning-up to changes in thinking, and a much needed demonstration of the historically grounded nature of knowledge. As a whole, the third edition emphasizes recursiveness and questioning within a deliberately political framework.

Contents: Preface. Introduction. Not Acquiring Spanish as a Second Language: The Politics of Second Language Acquisition. Writing in a Bilingual Program: It All Depends. Contextual Complexities: Written Language Policies for Bilingual Programs. The Effect of "Theory" on Several Versions, Over a Quarter Century, of a Popular Theory: Plus Ça Change, Plus C'est la Même Chose. Literacy: Some Purposeful Distinctions. On Second Thought. Whole Language: What's New? Hookin' 'Em in at the Start of School in a Whole Language Classroom. Risky Literacy. Criticism and Self-Criticism. Resisting (Professional) Arrest. Sorely Tested.

"The title and subtitle of Carole Edelsky's new edition of With Literacy and Justice For All: Rethinking the Social in Language and Education are more relevant now than when the second edition appeared in 1996. Political and economic changes have profoundly redefined language and literacy for teachers and children.... [The Third Edition] further documents the sociopolitical nature of schooling and in particular, language learning.... We are privileged to read 1) the evolution of Edelsky's thinking, and 2) the effects of the political then and now. Edelsky addresses many issues that are frightening and the book's disturbances compel readers to action. [Its] release comes at just the right time."--Steve Bialostok, Critical Inquiry in Language Studies

"The third edition of Carole Edelsky's text remains just as relevant for educational practitioners and language policy administrators today as when it was originally published some 15 years ago...This text offers up a true picture of the educational landscape as it was and is, and suggestions on how to combat harmful policy with holistic pedagogy."--Amy Schwartz, Language Policy (2008), 7: 305-307