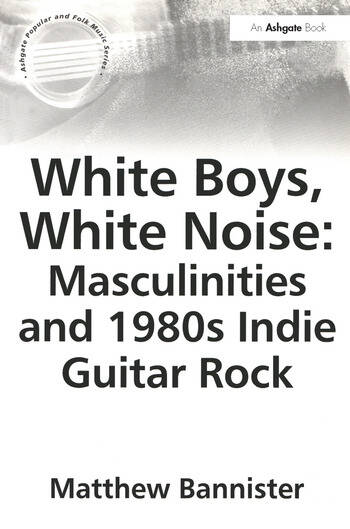 To what extent do indie masculinities challenge the historical construction of rock music as patriarchal? This key question is addressed by Matthew Bannister, involving an in-depth examination of indie guitar rock in the 1980s as the culturally and historically specific production of white men. Through textual analysis of musical and critical discourses, Bannister provides the first book-length study of masculinity and ethnicity within the context of indie guitar music within US, UK and New Zealand 'scenes'. Bannister argues that past theorisations of (rock) masculinities have tended to set up varieties of working-class deviance and physical machismo as 'straw men', oversimplifying masculinities as 'men behaving badly'. Such approaches disavow the ways that masculine power is articulated in culture not only through representation but also intellectual and theoretical discourse. By re-situating indie in a historical/cultural context of art rock, he shows how masculine power can be rearticulated through high, avant-garde, bohemian culture and aesthetic theory: canonism, negation (Adorno), passivity, voyeurism and camp (Andy Warhol and the Velvet Underground), and primitivism and infantilism (Lester Bangs, Simon Reynolds). In a related vein, he also assesses the impact of Freud on cultural theory, arguing that reversing binary conceptions of gender by associating masculinities with an essentialised passive femininity perpetuates patriarchal dualism. Drawing on his own experience as an indie musician, Bannister surveys a range of indie artists, including The Smiths, The Jesus and Mary Chain, My Bloody Valentine and The Go-Betweens; from the US, R.E.M., The Replacements, Dinosaur Jr, HÃ¼sker DÃ¼, Nirvana and hardcore; and from NZ, Flying Nun acts, including The Chills, The Clean, the Verlaines, Chris Knox, Bailter Space, and The Bats, demonstrating broad continuities between these apparently disparate scenes, in terms of gender, aesthetic theory and approaches to popular musical history. The result is a book which raises some important questions about how gender is studied in popular culture and the degree to which alternative cultures can critique dominant representations of gender.

Contents: Introduction - White boys...; Reviewing theories and representations of masculinities; Powerless power: masculine intellectualism and aesthetics; What does it mean to be alternative? Indie guitar rock as a genre; The singer or the song? Homosociality, genre and gender; 'Someone controls electric guitar': indie and technologies; 'What will I do if she dies?' Music, misery and masculinities; Conclusion - ...white noise. Bibliography; Index.

’Solid, researched intellectual discourse on rock music, particularly punk and indie, is hard to come by, and Bannister treats his subject matter - which includes R.E.M., the Smiths, The Minutemen and Nirvana - with the same level of respect a classical music scholar would give Mozart or Bach. That's refreshing.’ Thrive ’Matthew Bannister's new title adds a precious new body of study to the relatively thin gathering of books about the male and maleness in rock music, as he unpicks the part that masculinity and masculine values have played in shaping both the rock discourse and our understanding of it... rich and informed...an impressively researched survey... a highly satisfying overview...’ Popular Music