When Ideas Fail
Economic Thought, the Failure of Transition and the Rise of Institutional Instability in Post-Soviet Russia 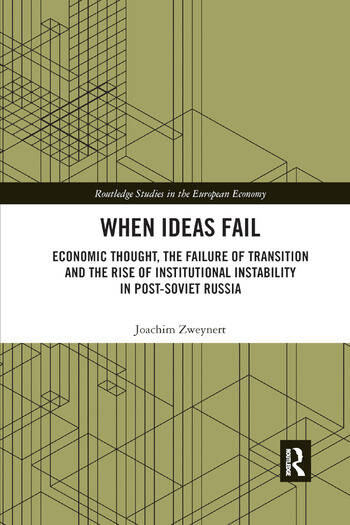 When Ideas Fail: Economic Thought, the Failure of Transition and the Rise of Institutional Instability in Post-Soviet Russia

In the history of Russian economic ideas, a peculiar mix of anthropocentrism and holism provided fertile breeding ground for patterns of thought that were in potential conflict with the market. These patterns, did not render the emergence of capitalism in Russia impossible. But they entailed a deep intellectual division between adherents and opponents of Russia’s capitalist transformation that made Russia’s social evolution unstable and vulnerable to external shocks.

This study offers an ideational explanation of Russia’s relative failure to establish a functioning market economy and thus sets up a new and original perspective for discussion. In post-Soviet Russia, a clash between imported foreground ideas and deep domestic background ideas has led to an ideational division among the elite of the country. Within economic science, this led to the emergence of two thought collectives, (in the sense of Ludvik Fleck), with entirely different understandings of social reality.

This ideational division translated into incoherent policy measures, the emergence of institutional hybrids and thus, all in all, into institutional instability. Empirically, the book is based on a systematic, qualitative analysis of the writings of Soviet/Russian economists between 1987 and 2012.

This groundbreaking book makes an important contribution to Central Eastern and Eastern European area studies and to the current debate on ideas and institutions in the social sciences.

2 The Role of Ideas in Great Transformations

Constructivist institutionalism and the structure/agency-problem

What is special about Russia

What is special about Russia I: Lack of liberal underground discourses

What is specific about Russia II: The struggle between two thought collectives

What is Specific about Russia III: Deep ideational backgrounds

Why deal with the Brezhnev period?

The economics of developed socialism

The origins of the concept

Back to the 1960s and taking it further

What was Soviet ideology?

Perestroika and the Soviet telos

Early debates in Voprosy ekonomiki, and the new textbook on political economy

The inﬂow of Western liberal ideas

The MEiMO debate on Western reforms

The Debates in the general interest press

The decline of Soviet ideology

The intellectual background to shock therapy

Post-industrial society and the comeback of slavophile ideas

The rise of Russian institutionalism

The discussion about the stabilization fund