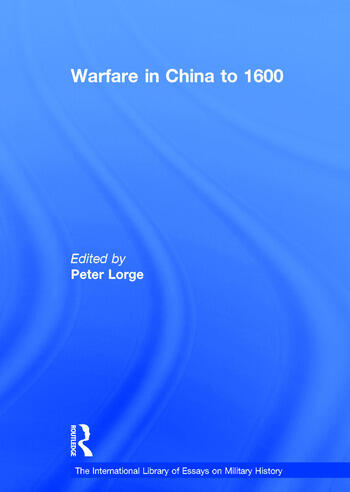 Chinese military history has emerged as one of the most promising and radical fields of Chinese studies. China's rapidly increasing military power make understanding the place of war in Chinese culture, as well as the role of the military, and Chinese strategic thought, vital to dealing with this possible threat. The recent flourishing of scholarship in this area has begun to allow an equivalent comparison with western and world military history, leading to a new understanding of war as a historical and cultural phenomenon, as well as revising earlier analyses of the significance of war in Chinese history. Assembled in this volume is a selection of articles that present earlier approaches to Chinese military history as well as the most recent trends in research. The introductory essay provides an overview of the field of Chinese military history and its significance in the study of China, as well as pointing out encouraging new developments in recent scholarship.

Contents: Introduction; Historical perspectives on the introduction of the chariot into China, Edward L. Shaughnessy; The history of the crossbow, illustrated from specimens in the United States University Museum, C. Martin Wilbur; Again the crossbow trigger mechanism, A.F.P. Hulsewé; Where have all the swords gone? Reflections on the unification of China, David N. Keightley; Where have all the swords gone: some reflections on some questions raised by Professor Keightley, William Trousdale; Did the swords exist?, Noel Barnard; A study of early Chinese armour, Albert E. Dien; Riding astride and the saddle in Ancient China, Chauncey A. Goodrich; The stirrup and its effect on Chinese military history, Albert E. Dien; The early development of firearms in China, L. Carrington Goodrich and FÃªng Chia ShÃªng; On the origin of rockets, Jixing Pan; 2 concepts of early Chinese military thought, Benjamin E. Wallacker; Li Ch'Ã¼an and Chinese military thought, Christopher C. Rand; New light on Ancient Chinese military tests: notes on their nature and evolution, and the development of military specialization in warring states China, Robin D.S. Yates; An illustrated battle-account in the history of the former Han dynasty, J.J.L. Duyvendak; Studies in medieval Chinese siegecraft: the siege of Fengtian, AD 783, Benjamin E. Wallacker; The battle of Huo-i, David A. Graff; Meritorious cannibal: Chang HsÃ¼n's defense of Sui-yang and the exaltation of loyalty in an age of rebellion, David A. Graff; The sword and the brush: military specialization and career patterns in Tang China, David A. Graff; Barbarians at the gates? The Tang frontier military and the An Lushan rebellion, Jonathan Karam Skaff; The entrance and exit of the Song founders, Peter Lorge; The Northern Song military aristocracy and the royal family, Peter Lorge; Military families and the Southern Song court - the LÃ¼ case, Cheng-Hua Fang; Turning the tide: the strategic and psychological significance of the liberation of

Peter Lorge is Professor at the Department of History, Vanderbilt University, USA.