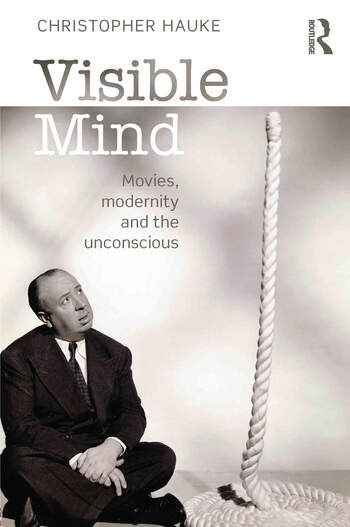 Why is the moving image so important in our lives? What is the link between the psychology of Jung, Freud and films? How do film and psychology address the problems of modernity?

Visible Mind is a book about why film is so important to contemporary life, how film affects us psychologically as individuals, and how it affects us culturally as collective social beings. Since its inception, film has been both responsive to historical cultural conditions and reflective of changes in psychological and emotional needs. Arising at the same moment over a century ago, both film and psychoanalysis helped to frame the fragmented experience of modern life in a way that is still with us today. Visible Mind pays attention to the historical context of film for what it can tell us about our inner lives, past and present.

Christopher Hauke discusses a range of themes from the perspective of film and analytical psychology, these include: The Face, The Shadow, Narrative and Story, Reality in Film, Cinema and the American Psyche, the use of Movies in the Psychotherapy Session and Archetypal themes in popular film. Unique to Visible Mind, six interviews with top film professionals from different departments both unlocks the door on the role of the unconscious in their creative process, and brings alive the reflexive critical thinking on modernity, postmodernity and Jungian psychology found throughout Visible Mind.

Visible Mind is written for academics, filmmakers and students who want to understand what Jung and Freud's psychology can offer on the subject of filmmaking and the creative process, for therapists of any background who want to know more about the significance of movies in their work and for film lovers in general who are curious about what makes movies work.

Part I: Watching Movies. Introduction; Modernity, fragmentation and film. The Face and Film; The surface and what’s beneath. Film and The Shadow; Film and its gaps - emptiness as shadow to substance. Cinema, Jung and the American psyche; How Europe got to know the mind of America through the movies. Part II: Making Movies. What makes movies work; Unconscious process and the filmmaker’s craft. Based on real events’; Narratives of fact and fiction in film. Changing Your Story. Narrative, time and meaning in the movies. Part III: Projecting movies. Out of the not-knowing, something forms. Unusual Suspects: movies in the therapist’s room. Anima-Animus; Soul-image and individuation.

Christopher Hauke is a Jungian analyst and senior lecturer at Goldsmiths, University of London, UK, and a filmmaker. He is the author of Human Being Human: Culture and the Soul (Routledge, 2005), Jung and the Postmodern: The Interpretation of Realities (Routledge, 2000), co-editor of Jung and Film: Post-Jungian Takes on the Moving Image (Routledge, 2001) and a new collection, Jung and Film II: The Return (Routledge, 2011).