Vaudeville, Old and New
An Encyclopedia of Variety Performers 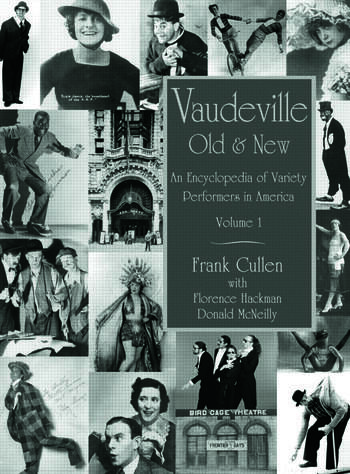 Vaudeville, Old and New: An Encyclopedia of Variety Performers

This is a one-of-a-kind reference work to the history of vaudeville, performance art, burlesque, revue, and comic opera. Most of these artists are not profiled in other reference books and the author has done deep research, including archival work and personal interviews, to uncover the rich history of this American artform. This will be a must-have for students of theater history and performance art, but it is also essential for anyone insterested in the cultural history of America.

Written by the winners of the Theatre Museum of New York's 2011 award for Excellence in the Preservation of Theatre History!

"Whether you start from the beginning and read it straight through, or use to look up an artist you found on a recording, you’ll find this book a great resource. It’s a tribute to the hard work and passion of the author. Highly recommended!" - Steve Ramm, "Anything Phonographic," In The Groove Magazine

"Two decades in the making, this ambitious resource is unique for its scope, details, and illustrations.  Cullen and his coauthors cover the full range of the subject, including contemporary variety entertainers and performance artists...It is destined to become a standard." - CHOICE

“A readable and entertaining text. … within the  covers of both volumes are many delights (and some terrifically offbeat listings) and much pleasure. … Certainly no reference work to date is comparable to the exhaustive, two-volume effort by Frank Cullen. … Truly the riches of this extraordinary work are numerous, the entertainment factor sizeable, and the lack of pretentiousness welcomed.” - Professor Emeritis Don B. Wilmeth, Theatre Survey, Fall 2007

“Bottom Line:  Whether it's used as a starting point for research or a fascinating glimpse into our theatrical history, this resource deserves top billing. Highly recommended for large reference as well as performing arts and popular culture collections.” - Carolyn Mulac, Library Journal, 2007

“All that you could ever want to know about vaudeville is contained in a monumental two-volume work, Vaudeville Old and New: An Encyclopedia of Variety Performers. It surpasses anything previously written about the American equivalent of British music hall and will stand as the major reference work on the subject for many years to come… fine writing evinces some deft and delicate touches. The extensive knowledge and deep love of vaudeville by the author, Frank Cullen [working with Florence Hackman and Donald McNeilly], shine through in each of these tomes' 1,300 magnificent pages.” - Richard Anthony Baker, The Stage (UK), February 2007