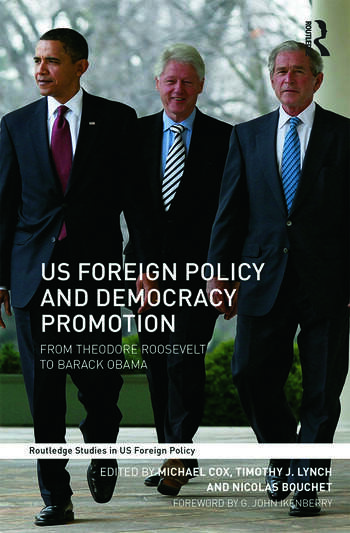 US Foreign Policy and Democracy Promotion: From Theodore Roosevelt to Barack Obama

The promotion of democracy by the United States became highly controversial during the presidency of George W. Bush. The wars in Iraq and Afghanistan were widely perceived as failed attempts at enforced democratization, sufficient that Barack Obama has felt compelled to downplay the rhetoric of democracy and freedom in his foreign-policy.

This collection seeks to establish whether a democracy promotion tradition exists, or ever existed, in US foreign policy, and how far Obama and his predecessors conformed to or repudiated it. For more than a century at least, American presidents have been driven by deep historical and ideological forces to conceive US foreign policy in part through the lens of democracy promotion. Debating how far democratic aspirations have been realized in actual foreign policies, this book draws together concise studies from many of the leading academic experts in the field to evaluate whether or not these efforts were successful in promoting democratization abroad. They clash over whether democracy promotion is an appropriate goal of US foreign policy and whether America has gained anything from it.

Offering an important contribution to the field, this work is essential reading for all students and scholars of US foreign policy, American politics and international relations.

Timothy J. Lynch is Senior Lecturer in American Politics at the University of Melbourne.

US Foreign Policy And Democracy Promotion revises our understanding of the origins of this great American preoccupation--think Teddy Roosevelt, not Woodrow Wilson--and recasts conventional wisdom on figures like Harry Truman and Ronald Reagan. It's an indispensable addition to the literature on democracy promotion.

James Traub, author of The Freedom Agenda: Why America Must Spread Democracy (Just Not the Way George Bush Did), Farrar, Straus and Giroux, 2008

For the past century, democracy promotion has been an important aspect of American foreign policy. This excellent volume shows how specific presidents from Teddy Roosevelt and Woodrow Wilson to George W. Bush and Barack Obama have wrestled with this often hotly contested issue. It will be a vital edition for anyone interested in American foreign policy.

Joseph S. Nye, Harvard University and author of The Future of Power.

An extremely refreshing perspective on a subject of long-standing concern… American democracy promotion strategies. With a dazzling array of leading scholars from across the disciplines…. this volume does something that so many others have failed to: place at the centre of its analysis of US foreign policy the holder of the world's most powerful office: the President of the United States….. strongly recommended.

A lot of ink has been spilled on the subject of U.S. democracy promotion, but I am aware of no other study that tackles it as Cox, Bouchet and Lynch have done here: by deploying a top notch posse of scholars to examine the phenomenon from the perspective of every American president from Theodore Roosevelt to Barack Obama. Framed brilliantly by Tony Smith’s sweeping theoretical and historical introduction, the subsequent chapters yield many novel insights, from TR’s surprising contributions to American democracy promotion to Obama’s curious ambivalence. This excellent collection proves how much can be learned about an important phenomenon simply by examining how leaders have grappled with it in a variety of challenging contexts.

Democracy promotion as an instrument of US foreign policy is a topic which has generated a prolific literature. But this collection is unique. First because it takes the subject from its historical roots and covers a huge period of time starting with Theodore Roosevelt and finishing with Barack Obama. Secondly, because it insists on something which is quite rare in the whole literature: the practicalities of democracy promotion and not simply its discourse. Democracy promotion on the ground is at the core of this original endeavour. The result is impressive. It gives a very illuminating interpretation on the continuity of us foreign policy in this domain and confirm the persistent obstacles it faces in spite of some non negligible achievements, when US interests and values match local expectations.  A must read book for students and scholars interested in us foreign policy and more generally on the interaction between values and interests, between principles drawn in Washington and stubborn realities on the ground.

This is an impressive and valuable book. Instead of the usual polemics about the United States as paragon or hypocrite, this book provides solid analysis of the scope and limits of U.S. democracy promotion. It does so with both historical sweep and contemporary focus, and lines of argument significant for both the scholarly and policy communities. And it holds together well, much more effectively integrated than edited volumes often are.

A comprehensive and critical assessment of the complex relationship between American foreign policy and the promotion of democracy around the world. These prominent contributors examine the role of U.S. presidents in promoting democracy, as well as conceptual and institutional questions. A must reading for students, scholars, and policymakers interested in understanding the making of American foreign in the last seven decades and the role of the liberal idea in advancing world order.

Fawaz A. Gerges, Professor of International Relations and director of the Middle East Centre at the London School of Economics and author of "Obama and the Middle East: The End of America’s Moment?".

This edited volume offered some interesting insights into US foreign policy that are not often addressed, especially comparatively.