Turkey-Syria Relations
Between Enmity and Amity 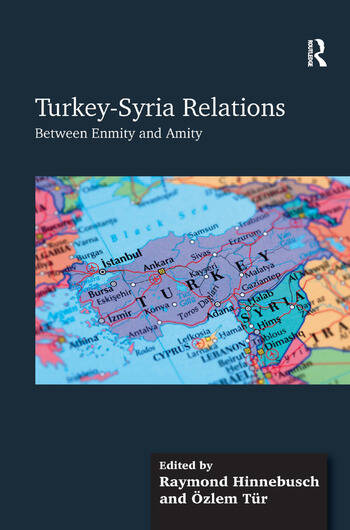 Turkey-Syria Relations: Between Enmity and Amity

In 1997 Turkey and Syria were on the brink of war, engaged in a very real power struggle. Turkey was aligned with Syria's main enemy, Israel, and there were seemingly intractable differences on the issues of borders, the sharing of river waters and trans-border communities. In less than a decade, relations were transformed from enmity to amity. Border issues and water sharing quarrels were moving towards amicable settlement and the two states' policies toward the Kurdish issue converging. Turkey undertook to mediate the Syrian-Israeli conflict and close political and economic relations were developing rapidly between the two states. Yet, with the Syrian Uprising, relations returned to enmity. What explains these remarkable changes? Given that Turkey and Syria are two pivotal states in the region, what are the implications of this changing relationship for the international politics of the Middle East, the balance of power and regional stability? In this internationally collaborative work, co-edited by Raymond Hinnebusch and Ã–zlem TÃ¼r, British, Syrian and Turkish scholars address these questions and examine the various domestic and international drivers in this key regional relationship. They discuss what theories best help us understand these seismic realignments and explore the impact of economic interdependence, identity changes and power balances on the evolving relationship between these two key regional powers.

Contents: Preface; Introduction: the study of Turkey-Syria relations, Raymond Hinnebusch; Ripeness theory and coercive diplomacy as a road to conflict resolution: the case of the Turkey-Syria showdown in 1998, Berna SÃ¼er; Syrian-Turkish relations: geopolitical explanations for the move from conflict to co-operation, Marwan Kalaban; Turkey’s Cold War alliance: nation -building and the utility of the 1957 Syrian crisis, Reem Abou-El-Fadl; Paradise lost: a neoclassical realist analysis of Turkish foreign policy and the case of Turkish-Syrian relations, Ahmet K. Han; ’Milking the male goat’ and Syrian-Turkish relations, Sami Moubayed; 'Victory of friendship'? Assad, Erdogan and football diplomacy in Aleppo, Philip Robins; As seen from Damascus: the transformation in Syrian-Turkish relations, Samir al-Taqi and Raymond Hinnebusch; The importance of the unimportant: understanding Syrian policies towards Hatay 1939-2012, Emma Lundgren JÃ¶rum; Ethnicity, religion and foreign policy: Turkish-Syrian relations since the 1980s, Yasemin Akbaba and Ã–zgÃ¼r Ã–zdamar; Back to conflict? The securitization of water in Syrian-Turkish relations, Marwa Daoudy; Turkey-Syria water relations: institutional development and political confrontations in the Euphrates and Tigris region, AysegÃ¼l Kibaroglu; The political economy of Turkish-Syrian relations in the 2000s - the rise and fall of trade, investment and integration, Ã–zlem TÃ¼r; Explaining the transformation of Turkish-Syrian relations: a regionalist approach, Meliha Benli Altunisik; The Syrian uprising and the Iran-Turkey-Syria quasi alliance: a view from Turkey, Ã–zden Zeynep Oktav; Conclusion, Raymond Hinnebusch and Ã–zlem TÃ¼r; Bibliography; Index.

’As Turkey turns toward the Middle East, relations with Syria mark the front line where simmering conflicts with Kurdish nationalists and Iran intersect with blossoming economic opportunities across the Levant and Gulf. This impressive collection explores crucial aspects of the relationship, from divergent state-building strategies to often-overlooked sporting events, and explains pivotal events using sophisticated theories of world politics.’ Fred H. Lawson, Mills College, USA ’This book looks into one of the most understudied bilateral relationships within the Middle East sub-system of the post 9/11 world, i.e. Turkey-Syria; providing comprehensive assessments from an extremely informative multinational group of authors, using a variety of theoretical approaches, disciplinary perspectives, and levels of analysis. It contributes to the understanding of foreign policy analysis literature by insisting that the best way to study it might be to incorporate the multiple dimensions of rival IR theories and to look at the interrelations between them rather than arguing for the exclusivity of one.’ Mustafa AydÄ±n, Kadir Has University, Turkey 'Turkey-Syria Relations is a comprehensive, engaging and important contribution to the literature on Turkish foreign policy.' The Middle East Journal 'To conclude, the book with its thorough discussion of the major issues and fault lines of Turkish-Syrian relations presents a valuable and timely attempt to rethink one of the vital affairs of a transforming region. The scope of the book extends Turkish-Syrian relations with its analytical endeavour which places changing patterns of Turkey-Syria relations within the major theoretical debates of the discipline of International Relations (IR). The book merits praise for avoiding the pitfalls of single-factor explanations and in particular, for its conclusion that successfully sums up the analytical implications of Turkish-Syrian affairs as a case study for understanding the ro