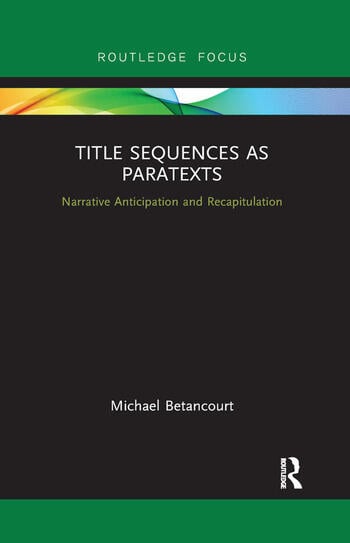 In his third book on the semiotics of title sequences, Title Sequences as Paratexts, theorist Michael Betancourt offers an analysis of the relationship between the title sequence and its primary text—the narrative whose production the titles credit. Using a wealth of examples drawn from across film history—ranging from White Zombie (1931), Citizen Kane (1940) and Bullitt (1968) to Prince of Darkness (1987), Mission: Impossible (1996), Sucker Punch (2011) and Guardians of the Galaxy, Vol. 2 (2017)—Betancourt develops an understanding of how the audience interprets title sequences as instances of paranarrative, simultaneously engaging them as both narrative exposition and as credits for the production. This theory of cinematic paratexts, while focused on the title sequence, has application to trailers, commercials, and other media as well.

The Paradoxes of Cinematic Paratext

Michael Betancourt is an artist/theorist concerned with digital technology and capitalist ideology. His writing has been translated into Chinese, French, Greek, Italian, Japanese, Persian, Portuguese, and Spanish, and been published in magazines such as The Atlantic, Make Magazine, Millennium Film Journal, Leonardo, Semiotica, and CTheory. He wrote The ____________ Manifesto, and other books such as The Critique of Digital Capitalism, The History of Motion Graphics, Semiotics and Title Sequences, Synchronization and Title Sequences, Glitch Art in Theory and Practice, and Beyond Spatial Montage: Windowing. These publications complement his movies, which have screened internationally at the Black Maria Film Festival, Art Basel Miami Beach, Contemporary Art Ruhr, Athens Video Art Festival, Festival des Cinemas Differents de Paris, Anthology Film Archives, Millennium Film Workshop, the San Francisco Cinematheque’s Crossroads, and Experiments in Cinema, among many others.