There is No Such Thing as a Natural Disaster
Race, Class, and Hurricane Katrina 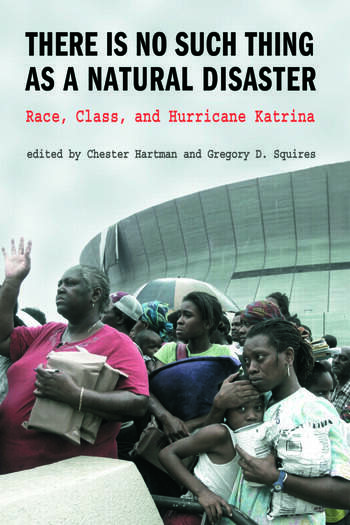 There is No Such Thing as a Natural Disaster: Race, Class, and Hurricane Katrina

There is No Such Thing as a Natural Disaster is the first comprehensive critical book on the catastrophic impact of Hurricane Katrina on New Orleans. The disaster will go down on record as one of the worst in American history, not least because of the government’s inept and cavalier response. But it is also a huge story for other reasons; the impact of the hurricane was uneven, and race and class were deeply implicated in the unevenness.

Hartman and. Squires assemble two dozen critical scholars and activists who present a multifaceted portrait of the social implications of the disaster. The book covers the response to the disaster and the roles that race and class played, its impact on housing and redevelopment, the historical context of urban disasters in America and the future of economic development in the region. It offers strategic guidance for key actors - government agencies, financial institutions, neighbourhood organizations - in efforts to rebuild shattered communities.

1. Pre-Katrina, Post-Katrina  2. A Matter of Choice: Historical Lessons for Disaster Recovery  3. Oral History, Folklore, and Katrina  4. Towards a Transformative View of Race: The Crisis and Opportunity of Katrina  5. Abandoned Before the Storms: The Glaring Disaster of Gender, Race, and Class Disparities in the Gulf  6. Katrina and the Politics of Later Life  7. Where is Home? Housing for Low-Income People After the 2005 Hurricanes  8. Reclaiming New Orleans’ Working-Class Communities  9. A New Kind of Medical Disaster in the United States  10. Double Jeopardy: Public Education in New Orleans Before and After the Storm  11. An Old Economy for the ‘New’ New Orleans? Post-Hurricane Katrina Economic Development Efforts  12. From Poverty to Prosperity: The Critical Role of Financial Institutions  13. The Role of Local Organizing: House-to-House with Boots on the Ground  14. Rebuilding A Tortured Past or Creating A Model Future: The Limits and Potentials of Planning

Chester Hartman, an urban planner and author, is Director of Research of the Poverty & Race Research Action Council in Washington, DC.

Gary Squires is Professor and Chair of the Sociology Department at George Washington University.

"There is No Such Thing As a Natural Disaster takes a comprehensive and critical look at the catastrophic impact of Hurricane Katrina." – Shelterforce

"This book covers the roles that race and class played in the response to Hurricane Katrina, the storm's impact on housing and redevelopment, the historical context of urban disasters in America, and the future of economic development in the New Orleans region. The authors assemble two dozen critical scholars and activists who present a multifaceted portrait of the implications of the disaster. The book also offers strategic guidance for key actors in efforts to rebuild shattered communities, including government agencies, financial institutions, and neighborhood organizations." – Natural Hazards Observer, July 2007

"Chester Hartman and Greg Squires should be commended for editing such a comprehensive, elegant collection of Hurricane Karina related essays showcasing a top-flight cast of distinguished scholars. There is No Such Thing as a Natural Disaster is a giant leap forward in our collective understanding of what went wrong in the Gulf South on August 29, 2005." – Douglas Brinkley, author of The Great Deluge: Hurricane Katrina, New Orleans, and the Mississippi Gulf Coast