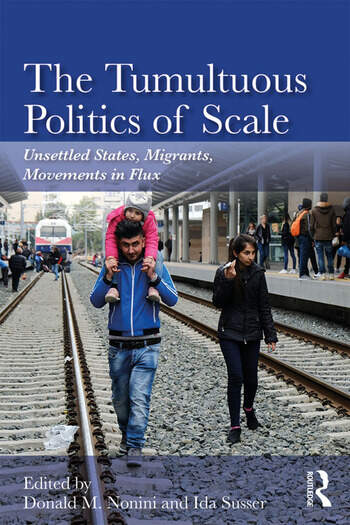 Contemporary politics, this book contends, depend upon the turbulent

struggles and strategies around scale. Confl icts over scale can be seen

as opaque class struggles. Political projects, whether from the ground up

or representing corporate or state interests, continually contest the scale at

which authority is vested. This volume looks at the way global corporations

are perpetrated or, more hopefully, redressed in this process? The book,

consisting of contributions from anthropologists, geographers, and cultural

spatial scales, and around variations in scale from the body to the global.

Part I focuses on bodies in motion, entangled in battles over new boundaries

and political coalitions, and the ways in which migrants and refugees

are disrupted by intersecting time scales. Part II on the nation- state addresses

and the impact of global energy trade on national austerity policies. Part

III, on rescaling sovereignty, discusses the misleading media discourse on

Europe that threaten the EU. Part IV on the histories of changing scales of

and sets out the transnational labor movements of the eighteenthand

labor in a world which is still one of uneven and combined capitalist development.

Finally, Part V considers ways in which some social movements are

1. Introduction – The Tumultuous Politics of Scale: Struggles, Strategies, and Scales in Action [Donald M. Nonini and Ida Susser] Part One. Scales of Domination: Transnational Migration and its Discontents 2. The Making and Un-Making of Border Scales: European Union Migration Control in North and West Africa [Sebastian Cobarrubias] 3. The Temporalities in Migration: Women and Reproduction in the Affective Economies of Late Capitalism [Winnie Lem] Part Two. Problematizing the Nation and the Nation-State 4. Political Violence, Criminal Law and Shifting Scales of Justice [Ruchi Chaturvedi] 5. Networked Flows through a "Porous" State: A Scalar Energo-political Account of the Greek Debt Crisis [Sandy Smith-Nonini] Part Three. Rescaling Sovereignty: The Case of the European Union and Its Outside Insiders 6. Making the Eastern Scale: Class, Contradiction, and the Rise of the ‘illiberal’ Right in Post-socialist Central Europe [Don Kalb] 7. Reimagining Scale, Space and Sovereignty: The United Kingdom and "Brexit" [John Clarke] Part Four. The Longue Durée  8. Interrogating the Agrarian Question Then and Now in Terms of Uneven and Combined Development [Gavin Smith]  9. Dispossession and Emancipation: Reframing Labor’s Political Question for the Neoliberal Era [August Carbonella]  Part Five. Social Movements: Reshaping the Domains of Conflict  10. Downscaled "Local Food" Movements from Below and the Corporate Food Movement from Above: What’s at Stake? [Donald M. Nonini]  11. Localism in One Local: Labor and Scale at the Saturn Automobile Factory [Sharryn Kasmir]  12. Social Protest: Rescaling As a Consequence of Nuit Debout/Occupy [Ida Susser]

Professor of Anthropology, University of North

Carolina, Chapel Hill, has undertaken research in Malaysia, Australia, and the

United States on citizenship in the Chinese diaspora; U.S. local politics; and

on the commons. His latest book is “Getting by”: Class and State Formation

and the Graduate Center, City University of New York, has published on

popular mobilizations, social movements, and the urban commons in the

United States, Europe, and Southern Africa. Her books include Norman

This book is a worthy and interesting contribution to the revival of "political-economic anthropology" -- that is to the analysis of ethnographic findings in terms of vastly unequal classes and class struggles. The book’s central question is what it means for anthropologists to return to political economy in the globalized world of today. Overall, the collection of essays makes the case for a new set of interlocutors for the discipline. Jane Schneider, City University of New York