The Routledge Guidebook to Galileo's Dialogue 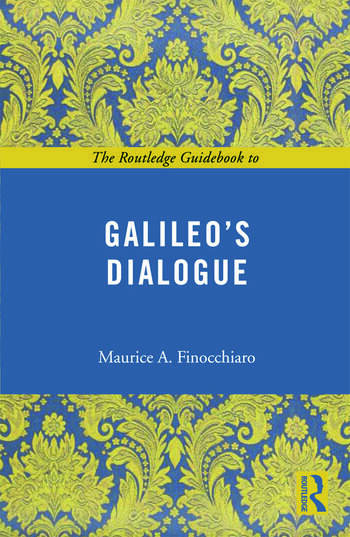 The Routledge Guidebook to Galileo's Dialogue

The publication in 1632 of Galileo’s Dialogue on the Two Chief World Systems, Ptolemaic and Copernican marked a crucial moment in the ‘scientific revolution’ and helped Galileo become the ‘father of modern science’. The Dialogue contains Galileo’s mature synthesis of astronomy, physics, and methodology, and a critical confirmation of Copernicus’s hypothesis of the earth’s motion. However, the book also led Galileo to stand trial with the Inquisition, in what became known as ‘the greatest scandal in Christendom’.

In The Routledge Guidebook to Galileo's Dialogue, Maurice A. Finocchiaro introduces and analyzes:

This is an essential introduction for all students of science, philosophy, history, and religion wanting a useful guide to Galileo’s great classic.

Maurice A Finocchiaro is Distinguished Professor of Philosophy, Emeritus; University of Nevada, Las Vegas. He has written and translated numerous works on Galileo and the history of science including Galileo on the World Systems: A New Abridged Translation and Guide (1997) and The Essential Galileo (2008).

"This Guidebook is an excellent introduction to Galileo's classic." - Simon Mitton, The Observatory Magazine, December 2014

"Well-known Galileo expert Finocchiaro provides the necessary guidance to understand the historical context, the intellectual background, and the key arguments that Galileo presented… Part of "The Routledge Guides to the Great Books" series, it will be a good resource for faculty using a great books curriculum. Summing Up: Recommended." M -K Hemenway, University of Texas at Austin, in CHOICE

"Finocchiaro describes in a lucid and rigorous way the arguments and critiques that Galileo presented in the Dialogue, and he assesses the content and the significance of the book from three special points of view: science, methodology, and rhetoric ... This scholarly introduction to Galileo’s achievements will be welcomed by anyone teaching the history of science or simply curious about how we came to know that the Earth is in motion." - William R. Shea, The Catholic Historical Review

"No other book on Galileo that I know of ... delivers such a detailed and crystal clear step by step explanation to the reader of the Dialogue by commenting on the scientific, philosophical, methodological, rhetorical and other aspects of all the various themes and subthemes that are treated during the Four Days of discussions between three noble gentlemen." - J.C. van den Berg

"The Routledge Guidebook to Galileo’s Dialogue persuasively shows that the value of Galileo’s work transcends questions of right or wrong, martyr or heretic, science or religion, demonstrating how we might still learn from him to engage convincingly in intellectual debate." - Crystal Hall, ISIS

"I and many future readers will be grateful to Finocchiaro for his book’s stimulating and useful analyses. His Guidebook has both deepened my own understanding of the Dialogue’s argumentation and often sent me back to that remarkable text ... I can imagine no better starting point than this book." - Michael H. Shank, Science & Education