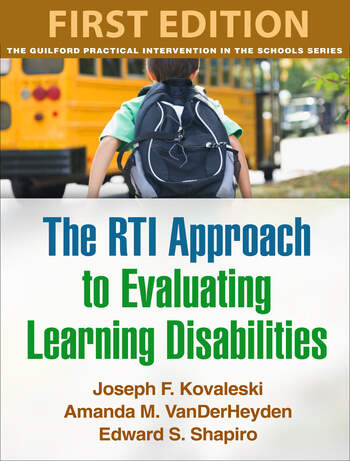 This book presents clear-cut procedures for using response to intervention (RTI) to determine a K-12 student's eligibility for special education under the designation of specific learning disabilities (SLD). Comprehensive guidelines are provided for gathering student data in the course of interventions and ruling out causes other than SLD for academic problems. Special features include case examples, tips for creating individualized education plans based on RTI data, and frequently asked questions. With a convenient large-size format and lay-flat binding, the book features useful reproducible tools. Purchasers also get access to a Web page where they can download and print the reproducible materials.

This book is in The Guilford Practical Intervention in the Schools Series, edited by T. Chris Riley-Tillman.

Introduction
1. Historical and Legal Background for Response to Intervention
2. Implementing RTI as School Reform: Instructional Prerequisites for Using RTI for Eligibility Decision Making
3. Determining Inadequate Academic Achievement
4. Determining Rate of Improvement
5. Ruling Out Other Conditions
6. Ruling Out Inadequate Instruction
7. The Observation Requirement
8. Parent Involvement in an RTI System
9. Determining Eligibility for Special Education: Pulling All the Pieces Together in a Comprehensive Evaluation
10. Using RTI Data to Build an IEP
11. Frequently Asked Questions about RTI and SLD

Joseph F. Kovaleski, DEd, is Professor of Educational and School Psychology and Director of the Doctoral Program in School Psychology at Indiana University of Pennsylvania. He serves on the Advisory Board of the RTI Action Network at the National Center for Learning Disabilities (NCLD) and on the Editorial Board of School Psychology Review. In 2005, Dr. Kovaleski, with Edward S. Shapiro, initiated RTI in Pennsylvania through the Pennsylvania Training and Technical Assistance Network. He has published articles, book chapters, and Web-based content on RTI and other topics related to school reform and school psychology.

Amanda M. VanDerHeyden, PhD, is a private consultant, researcher, and national trainer who has worked in a number of school districts and is President of Education Research and Consulting, Inc., in Fairhope, Alabama. She serves on the Advisory Board of the RTI Action Network at the NCLD and is also a member of the NCLD's Education Programs Committee and a panelist at the Institute for Education Sciences, U.S. Department of Education. Dr. VanDerHeyden received the Lightner Witmer Early Career Contributions Award from Division 16 (School Psychology) of the American Psychological Association (APA). She is Associate Editor of School Psychology Review and has published numerous articles and books related to RTI.

Edward S. Shapiro, PhD, until his death in 2016, was Director of the Center for Promoting Research to Practice and Professor in the School Psychology Program at Lehigh University. Best known for his work in curriculum-based assessment and nonstandardized methods of assessing academic skills problems, Dr. Shapiro was author or coauthor of numerous books. He also developed the widely used BOSS (Behavioral Observation of Students in Schools) software system and presented papers, chaired symposia, and delivered invited addresses at conferences around the world. Dr. Shapiro's contributions to the field of school psychology have been recognized with the Outstanding Contributions to Training Award from Trainers of School Psychologists, the Distinguished Contribution to School Psychology Award from the Pennsylvania Psychological Association, the Eleanor and Joseph Lipsch Research Award from Lehigh University, and the Senior Scientist Award from the Division of School Psychology of the American Psychological Association, among other honors.

"This timely book should be required reading for every school psychologist and special educator. In addition to outlining the steps needed to use RTI data as part of eligibility decisions for SLD, the authors provide important details to guide the development of multi-tier systems. The often-cited but rarely defined 'dual-discrepancy' method for documenting a student's response is explained in clear and understandable language. A particular strength is the chapter on including classroom observation data to document the student's engagement with the instructional environment. School teams will find invaluable tools for supporting the needs of students with persistent academic difficulties."--Rachel Brown-Chidsey, PhD, NCSP, Department of Educational Psychology and Exceptionality, University of Southern Maine

"Although much has been written about RTI, no one has really addressed most practitioners' primary question--how to make SLD identification decisions with the data. Kovaleski, VanDerHeyden, and Shapiro fill an important gap with this research-based, well-written book. In fact, this might be the most comprehensive book published to date about SLD evaluation. It takes the reader from screening through setting up early intervention, involving parents, conducting a comprehensive evaluation, and writing individualized education plans. This is a useful guide for practitioners transitioning to an RTI identification model, and could certainly be used in preservice training."--Matthew K. Burns, PhD, Department of Special Education, University of Missouri–Columbia

"One of the best resources I've seen on how to use RTI in instructional and intervention decision making. The book explores and unpacks the critical components of systemic, data-based determination of special education eligibility. Its rich research base provides the foundation for creating and sustaining multi-tier systems of support to improve all students' outcomes. Simply a 'must have' for any educator working to create and sustain systems change."--Judy Elliott, PhD, former Chief Academic Officer, Los Angeles Unified School District