The Political Anthropology of Ethnic and Religious Minorities 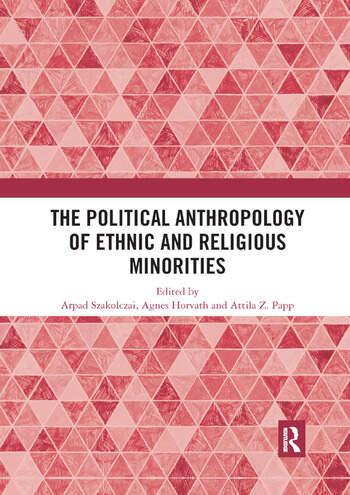 The Political Anthropology of Ethnic and Religious Minorities

This book presents some arguments for why a political anthropological perspective can be particularly helpful for understanding the connected political and cultural challenges and opportunities posed by the situation of ethnic and religious minorities. The first chapter shortly introduces the major anthropological concepts used, including liminality, trickster, imitation and schismogenesis; concepts that are used together with approaches of historical sociology and genealogy, especially concerning the rise and fall of empires, and their lasting impact. The conceptual framework suggested here is particularly helpful for understanding how marginal places can become liminal, appearing suddenly at the center of political attention. The introduction also shows the manner in which minority existence can problematize the depersonalizing tendencies of modern globalization. Subsequent chapters demonstrate how the described political anthropological conceptual framework can be used in certain European regions, and in the case of certain ethnic and religious minority, and each illustrates that instead of charismatic leaders, trickster politicians are emerging and increasingly dominate, through the "public sphere", the space of modern politics emptied of real presence.

The chapters in this book were originally published as a special issue of Nationalism and Ethnic Politics.

1. Individualization as Depersonalization: Minority Studies and Political Anthropology   2. Trickster Logics in the Hungarian Dual-Citizenship Offer   3. "Liminal" Orthodoxies on the Margins of Empire: Twentieth-Century "Home-Grown" Religious Movements in the Republic of Moldova   4. Fluid Identity, Fluid Citizenship: The Problem of Ethnicity in Postcommunist Romania   5. Central Marginality: Minorities, Images, and Victimhood in Central-Eastern Europe   6. Defending the Nation from her Nationalism(s)   7. Reconciliation and After in Northern Ireland: The Search for a Political Order in an Ethnically Divided Society    8. "In the Margins of Europe": Cypriot Nationalism, Liminality, and the Moral Economy of the Financial Crisis

Arpad Szakolczai is Professor of Sociology at University College Cork, Ireland, and has previously taught at the European University Institute, Florence, Italy. His recent books include Comedy and the Public Sphere (2013), Novels and the Sociology of the Contemporary (2016) and Permanent Liminality and Modernity: Analysing the Sacrificial Carnival through Novels (2017).

is a sociologist and political scientist with an interest in an anthropological understanding of modernity. She has taught in Hungary, Italy and Ireland. Her publications include The Dissolution of Communist Power (1992), Modernism and Charisma (2013), and Breaking Boundaries: Varieties of Liminality (2015).

is a sociologist, and he is director of the Institute for Minority Studies at the Hungarian Academy of Sciences, Centre for Social Sciences. His articles are included in 21st Century Hungarian Language Survival in Transylvania (2015) and Minority Hungarian Communities in the Twentieth Century (2010).