The Poems of Andrew Marvell 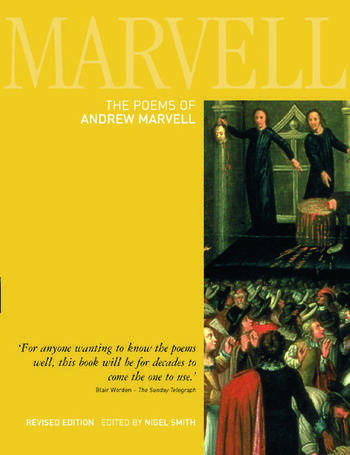 The Poems of Andrew Marvell

Little known as a poet in his own time, Andrew Marvell (1621-78) was a patriotic politician and champion of religious toleration during the Restoration. Although long celebrated for the great love lyric, To His Coy Mistress, the last century has seen his wider reputation as a poet grow significantly, as readers have acclaimed not only his technical excellence, but the appeal of his verse to such themes as poetry and politics, alternative sexualities and the criticism of violent persecution.

Nigel Smith presents an authoritative text of Marvell's poetry, accompanied by extensive annotations giving an unprecedented record of literary, philosophical and theological analogues and allusions. Local points of interpretation are addressed - using the many hundreds of publications devoted to Marvell's life and works -  and Marvell's canon is re-appraised: some poems considered dubious hitherto are added, and others excluded. In a headnote to each poem, the reader will find the fullest accounts yet published of matters of dating, sources, publication, historical context, and critical reception. The first complete, annotated edition of Andrew Marvell's verse for thirty years, this is an indispensable guide to the study of Marvell's poetry

This revised edition contains new information available since the original publication: newly recovered versions of some poems, further details of historical context and updated translations of all the Latin poems. It remains the first point of reference for scholar, student and general reader alike.

Note by the General Editors  Introduction  Acknowledgements  Chronological Table of Marvell's Life and Chief Publications  Poems  1. Poems Published in Print Before 1650  2. Miscellaneous Poems (1681)  3. The Mower Poems  4. Ambassador from the Protector to the Queen of Sweden  5. The Advice-to-a-Painter and Associated Poems  6. Verse Satires from the 1670s  Appendices  Bibliography of References Cited  Index of Titles and First Lines

Nigel Smith is a Professor of English at Princeton University. He is the author of Perfection Proclaimed: Language and Literature in English Radical Religion, 1640-1660 (OUP, 1989) and Literature and Revolution in England, 1640-1660 (Yale UP, 1994).

"The more I read, the more fascinating it became... the poems now move with even more life than they did before. If you've ever been impressed by the beauty, intelligence and sly mystery of Marvell's work, you're really going to have to get this." - Nicholas Lezzard, The Guardian

"His commentary is in many ways the best available on Marvellâ€¦On sources, Smith is highly informative..." - Times Literary Supplement

"...detailed notes and careful annotations are of high order and form a scholarship of which any editor and publisher can be justly proud." - Contemporary Review

"You could not get a more learned edition... Masterly introduction to each poem" -AN Wilson in The Telegraph, 16 October 2006