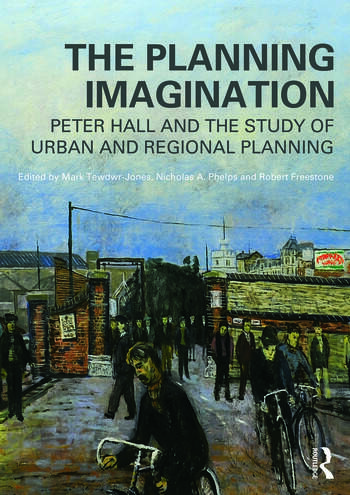 The Planning Imagination: Peter Hall and the Study of Urban and Regional Planning

Knighted in 1998 ‘for services to the Town and Country Planning Association’, and in 2003 named by Her Majesty Queen Elizabeth II as a ‘Pioneer in the Life of the Nation’, Peter Hall is internationally renowned for the breadth and depth of his studies and writings on urban and regional planning. For the last 50 years, he has captured and helped to create the ‘planning imagination’.

Here the editors have brought together in five themes a series of critical reflections on Peter’s vast and diverse contributions. Those reflections are provided by colleagues familiar with his work.

The five parts are devoted to Peter Hall’s breadth of academic work, covering the history of cities and planning, London, spatial planning, connectivity and mobility, and urban globalization. Finally, as a sixth part, the editors have asked Peter Hall himself to reflect on his career and the sources of his imagination.

The story this book tells is not one of a singular, totally consistent theoretical and philosophical view elaborated over several decades. Rather it covers a set of views that necessarily admits signs of Peter’s inconsistency and imperfection over the years – the insights and imperfections that inevitably accompany the exercise of a nonetheless remarkably fertile, restless and inspiring planning imagination.

Mark Tewdwr-Jones is Professor of Spatial Planning and Governance at the Bartlett School of Planning, University College, London. Born in Wales and educated at Cardiff and London Universities, he worked previously in local government in Devon and at Cardiff and Aberdeen Universities. Research activity focuses on the politics and governance of planning, including spatial planning, land use planning futures, place-making, media representations of planning and planners urban and regional development, governance and devolution, and representations of planning and urban life. He has authored or edited numerous books, most recently co-authoring the fifth edition of the classic Urban and Regional Planning with Peter Hall. He has advised ministers in UK Government, the Welsh Assembly and Scottish Executive, on aspects of planning, and recently served as a lead expert for the Government Chief Scientist’s Foresight project on Land Use Futures. He has advised governments and presented key papers in the Europe, the US, Canada, Australia, South Korea and China.

Nicholas Phelps is Professor of Urban and Regional Development at the Bartlett School of Planning, University College, London. He trained as a geographer at UCL before completing a PhD in geography at the University of Newcastle-upon-Tyne. He has since worked in planning schools at Strathclyde and Cardiff Universities and in geography schools at Leeds and Southampton. His research interests cover urban politics, the dynamics of suburban and edge urban development, multi-national companies and economic development and the role of the planning system in investment attraction. He has acted in a consultancy capacity to BBC Wales, Welsh Development Agency, a consortium including Yorkshire & Humberside Regional Technology Network, GeoCat University of Leeds, Yorkshire Enterprise Group, Croydon Council, and the Local Futures Group. His books include Post-suburban Europe (2006) and The New Competition for Inward Investment (2003).

Robert Freestone is Professor of Planning and Urban Development in the Faculty of the Built Environment at the University of New South Wales in Sydney. He has held previous ppointments in the Department of Geography at the University of Melbourne, the Urban Research Program at the Australian National University, the NSW Department of Planning, and Sydney planning consultancy Design Collaborative. He has written and edited or co-edited eleven books. These include Urban Nation: Australia’s Planning Heritage (2010), Cities, Citizens and Environmental Reform (2009), Designing Australia’s Cities (2007), Human Scale in Architecture (2003), The Australian Metropolis: A Planning History (2000), Urban Planning in a Changing World (2000), Spirited Cities (1994), and Model Communities (1989). He is a Past President of the International Planning History Society, associate editor of the journal Planning Perspectives, and on the editorial boards of Journal of Planning History, Progress in Planning, and Town Planning Review.

Nicholas A. Phelps is Professor of Urban and Regional Development at University College London, UK.

Robert Freestone is Professor of Planning at the University of New South Wales, Australia.