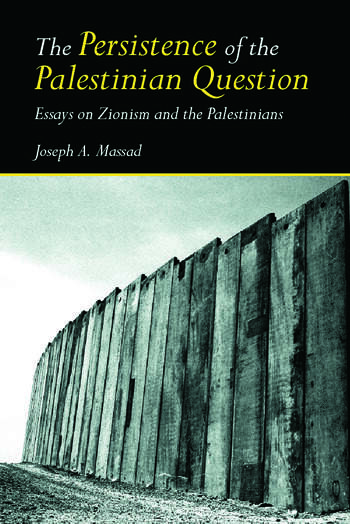 In this erudite and groundbreaking series of essays, renowned author Joseph Massad asks and answers key questions, such as: What has been the main achievement of the Zionist movement? What accounts for the failure of the Palestinian National Movement to win its struggle against Israel? What do anti-Semitism, colonialism and racism have to do with the Palestinian/Israeli 'conflict'?

Joseph Massad offers a radical departure from mainstream analysis in order to expose the causes for the persistence of the 'Palestinian Question'. He proposes that it is not in de-linking the Palestinian Question from the Jewish Question that a resolution can be found, but by linking them as one and the same question. All other proposed solutions, the author argues, are bound to fail.

Deeply researched and documented, this book analyzes the failure of the 'peace process' and proposes that a solution to the Palestinian Question will not be found unless settler-colonialism, racism, and anti-Semitism are abandoned as the ideological framework for a resolution. Individual essays further explore the struggle over Jewish identity in Israel and the struggle among Palestinians over what constitutes the Palestinian Question today.

Introduction: The Opposite of Terror  Part 1  1. The "Post-Colonial" Colony: Time, Space, and Bodies in Palestine/Israel  2. Conceiving the Masculine: Gender and Palestinian Nationalism  3. Zionism’s Internal Others: Israel and the Mizrahim  Part 2  4. Palestinians and the Limits of Racialized Discourse  5. Repentant Terrorists or Settler-Colonialism Revisited: The PLO-Israeli  6. Political Realists or Comprador Intelligentsia: Palestinian Intellectuals  7. Return or Permanent Exile? Palestinian Refugees and the Ends of Oslo  8. Palestinians and Jewish History: Recognition or Submission?  9. The Ends of Zionism: Racism and the Palestinian Struggle  10. History on the Line: Joseph Massad and Benny Morris Discuss the Middle East  11. The Persistence of the Palestinian Question

Joseph A. Massad is Associate Professor of Modern Arab Politics and Intellectual History at Columbia University. He is the author of Colonial Effects: The Making of National Identity in Jordan (2001).

'Massad is no practitioner of political correctness and one may not agree with everything he says. But his critique of Zionist ideology and practise is thoroughly researched, powerfully argued and often brilliantly insightful.' - Walid Khalidi, formerly of Harvard University, USA

'Joseph Massad's The Persistence of the Palestinian Question insightfully probes contemporary politics within a broader historical framework. Looking into the contradictions around and within Palestine, the essays illuminate the complex shaping of the diverse and even conflicting Palestinian positions. This timely and engaging volume makes an invaluable contribution to the ongoing debate over Zionism and Palestine.' - Ella Shohat, New York University, USA

'This is a thought provoking book that forces us to reverse our conventional images and perceptions about Palestine's history and future. This is a courageous intellectual exercise, long needed, in an often overburdened and repetitive field of inquiry.' - Ilan Pappe, University of Haifa, Israel

'The title of this book does not do justice to the contribution this book makes to the history of Zionism, Israel, and the Jews. Massad's brilliant and scholarly work is profoundly illuminating not only for the history of Palestine and the discourses surrounding it, but for the history of Europe and the United States and, finally, as an account that raises compelling theoretical questions.' - Anne Norton, Journal of Palestine Studies, Volume XXXVI Number 2, Winter 2007'

'The Persistence of the Palestinian Question is a valuable collection of essays analysing the discourses that drive, describe and dominate the Palestinian Question… Through 11 essays, as well as a heated Benny Morris–Joseph Massad interview-debate, Massad shows us that he is an apt follower of the Edward Said school.' Journal of Peace Research

'In The Persistence of the Palestinian Question: Essays on Zionism and the Palestinians, Massad stakes his claim to the mantle of leading Palestinian intellectual bequeathed him by former Columbia colleague Edward Said. It is a claim well made. Picking up the weaponry of discourse analysis, Massad sets out to reframe the debate, confront a hegemonic Zionist narrative, and articulate an alternative. His essays are guaranteed to annoy and stimulate in equal measure.' Middle East Journal

'Massad offers original and exciting insights in each of the eloquently written and eruditely reasoned chapters.' Arab Studies Journal

'This book makes fascinating reading for two interrelated reasons: It demonstrates with erudition the interconnectedness between the destinies of Israelis and Palestinians, not only in the obvious fact they share the same land, but also because many aspects of their identities and contemporary outlooks have been shaped in this faithful encounter… The book is fastidiously referenced, showing the erudition of the author and his command of the voluminous Israeli and Palestinian literature as well as the classics of Jewish history.' Ephraim Nimni in Nations and Nationalism

'[This] is a painfully honest book...Massad's incisive critique of the false premises on which the 'peace process' was conducted helps explain the dismal situation in which Palestinians find themselves today.' Jordan Times