The Middle East and North Africa 2007 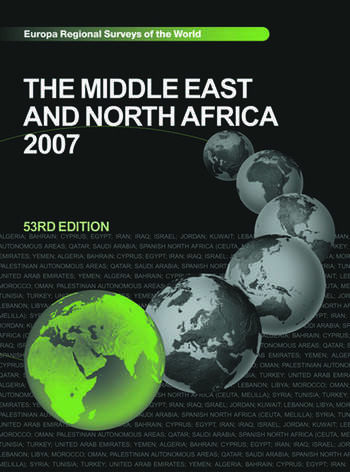 The Middle East and North Africa 2007

Now in its fifty-third edition, this title continues to provide the most up-to-date geo-political and economic information for this important world area. The volume covers:

* the Middle East and North Africa from Algeria to Yemen

* offers quick access to a wide range of data

* accurately and impartially records the latest political and economic developments

* provides comprehensive data on all major organizations in the region.

* includes all major international organizations active in the region, their aims, activities, publications and principal personnel

* research Institutes specializing in the region

* bibliographies of books and periodicals covering the Middle East and North Africa.

'There is simply nothing else on the market that provides as much material on each of the countries of the Middle East and North Africa in one volume.' - Royal United Services Institute for Defence Studies

'One of the most highly regarded publications of its kind.' - The Middle East

'A must have publication for serious researchers of the Middle East and one of the most highly respected books of it's genre.' - The Middle East

'It accurately and impartially records the latest political and economic developments, and provides comprehensive data on all major organisations in the region.' - The Middle East