The Long Reconstruction
The Post-Civil War South in History, Film, and Memory 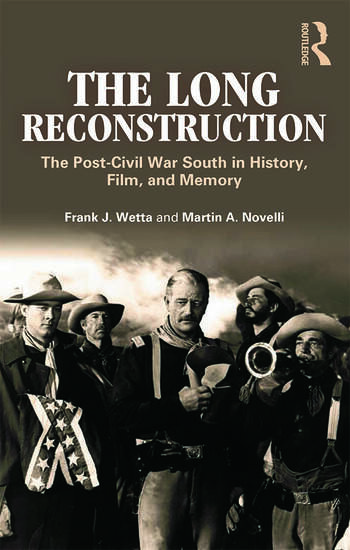 The Long Reconstruction: The Post-Civil War South in History, Film, and Memory

A century and a half after the Civil War, Americans are still dealing with the legacies of the conflict and Reconstruction, including the many myths and legends spawned by these events. The Long Reconstruction: The Post-Civil War South in History, Film, and Memory brings together history and popular culture to explore how the events of this era have been remembered.

Looking at popular cinema across the last hundred years, The Long Reconstruction uncovers central themes in the history of Reconstruction, including violence and terrorism; the experiences of African Americans and those of women and children; the Lost Cause ideology; and the economic reconstruction of the American South.

Analyzing influential films such as The Birth of a Nation and Gone with the Wind, as well as more recent efforts such as Cold Mountain and Lincoln, the authors show how the myths surrounding Reconstruction have impacted American culture.

This engaging book is essential reading for anyone interested in the history of Reconstruction, historical memory, and popular culture.

1. "The Night They Drove Old Dixie Down": Constructing Reconstruction History

4. "Sunshine Headin' My Way": Memories of Reconstruction in Black and White

5. Wilkes & Kennedy, Inc.: War and the Destruction of the Old Order

6. "I Am Vengeful and I Shall Not Sleep": The Civil War and the Legacy of Violence during Reconstruction

7. "A Gallant Soldier and a Christian Gentleman": The Reconciliation of North and South

8. The Princess of the Moon: The Lost Cause and the Unfinished Civil War

Frank J. Wetta is Lecturer, Department of History, and Senior Fellow, Center for History, Politics, and Policy, Kean University. He is the author of The Louisiana Scalawags: Politics, Race, and Terrorism during the Civil War and Reconstitution (2012).

is Professor of Film, History, and Humanities at Ocean County College, New Jersey. He also teaches film history at the University of the Arts, Philadelphia.

"This fascinating book provides a valuable time line of the chronological developments associated with the Civil War and Reconstruction...To demonstrate how history, memory, and meaning collude, Wetta and Novelli examine films from Birth of a Nation and Gone with the Wind to Cold Mountain and Lincoln as visual documents that participate in the mythmaking process.  The audience includes, but is not limited to, those interested in history during the Reconstruction era, particularly southern history, African American history, film studies, and cultural studies.  Summing Up: Recommended."

"The Long Reconstruction is a fascinating study that will force readers to think about familiar films in new ways. As they read a century of popular cinema, Wetta and Novelli make a number of persuasive claims about the often-uneasy relationship between historical memory and popular culture. This pithy and engaging book will be welcomed by cultural historians and film buffs alike."

– Coleman Hutchison, author of Apples and Ashes: Literature, Nationalism, and the Confederate States of America

"The Long Reconstruction is a very accessible account of an important and highly contested period in American history. The combination of popular culture, traditional history, and interpretative bite will make this book an eye opener for students and general readers alike. In dealing with the relationship between history and memory, Wetta and Novelli use literature, music, and movies to explore the major themes and events of the era. The result is an enlightening study that is fun to read."

“…The Long Reconstruction: The Post-Civil War South in History, Film and Memory is useful as an introduction to Reconstruction and the Lost Cause and their representations in the fantasy world of motion pictures. As Wetta and Novelli remind us, films enjoy a long history of guiding (and misguiding) popular attributes about the legacy of the Civil War South.”

-Zachary J. Lechner, North Carolina School of Science and Mathematics in The Journal of Southern History