The Iraq War
European Perspectives on Politics, Strategy and Operations 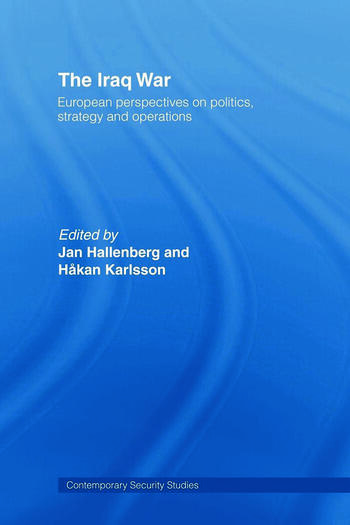 The Iraq War: European Perspectives on Politics, Strategy and Operations

We are living amidst the fallout of the most controversial conflict of our times. This book is a tough examination of how and why it was fought and of its continuing effects.

This major new work contains analysis of the Iraq War from several different academic, as well as military perspectives. Its emphasis is on the links between US foreign policy, US strategy and the US conduct of war and it also covers Iraqi grand strategies, the consequences of the War for transatlantic relations, and includes a chapter on the International Law dimension. In scrutinzing the war and the behaviour of its main parties, the editors draw upon international relations, political science, strategic thought and military theory, plus international law and media studies. For those wishing to understand the Iraq war from a very wide range of rigorous perspectives, this is a must-read.

1. Puzzles and Propositions in the Iraq War  2. What were the Bush Administration’s Goals in Invading Iraq?  3. The Iraq War and the Transatlantic Relationship  4. Russia’s Choice: Preserve the Status Quo  5. Iraq’s Political Strategy before and during the War  6. Sweden, the Western World and the War that Saw the Birth of Iraq: Implications of the Events in 1914-1921 for the Present Conflict  7. The Iraq War and International Law: From Hugo Grotius to George W. Bush  8. Brute Force or Coercion: Two Perspectives on Conflict Management, Stefan Ring  9. Doctrine, Expertise and Arms in Combination: A Reflection on the Iraq War  10. The Iraq Air War in 2003: Back to the Future?  11. The Struggle for Credibility during the Iraq War  12. Conclusions

Dr Jan Hallenberg is at the Department of Security and Strategic Studies, Swedish National Defence College. He is a specialist on US foreign and security policy. His publications include The Demise of the Soviet Union: Analysing the Collapse of a State (Ashgate, 2002).

Dr Hakan Karlsson is at the Department of Security and Strategic Studies, Swedish National Defence College=. He is a specialist on US strategy and nuclear weapons. His publications include Bureaucratic politics and weapons acquisition: the case of the MX ICBM program (two volumes, 2002).