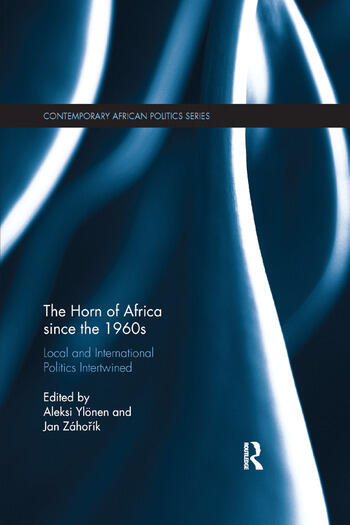 The Horn of Africa since the 1960s: Local and International Politics Intertwined

The Horn of Africa has long been one of the most dynamic and politically turbulent sub-regions on the African continent.  Host to great ancient civilizations, diverse peoples, and expansive states, the region has experienced massive social, economic, and political transformations which have given rise to military coups, revolutions and intractable ethnic, socio-economic, and religious conflicts.

This comprehensive volume brings together a team of expert scholars who analyze international, regional, national, and local affairs in the Horn of Africa. The chapters demonstrate the intertwined nature of the actors and forces shaping political realities. The case studies, focusing on Ethiopia, Eritrea, Somalia, Somaliland, Sudan, and South Sudan eloquently illustrate the complex dynamics connecting the spectrum of political issues in the region.

The Horn of Africa since the 1960s will be of interest to students and scholars of contemporary Africa and political science.

2. Turbulent Political Developments in the Horn of Africa in the Cold War: The central role of Ethiopia, 1960s to 1980s

3. States Breaking and Dominoes Falling? Considerations of Separatism and International Recognition in the Horn of Africa


4. External Factors and Their Impact on Internal Political Dynamics in Ethiopia

5. State making, transnational clientelism and political communities in the Horn of Africa

8. Somali Independence and its political connections with Nasser’s Egypt

9. When the outside is inside: International features of the Somali "civil" war

10. Crisis of Statehood in Somalia

11. Any Prospects for Future Peace? Politics and War Surrounding the Sudan-South Sudan Conundrum

12. Affirmation or Erosion of Sovereignty in the Horn of Africa? The Case of De Facto State Somaliland

13. A hybrid actor in the Horn of Africa: An analysis of Turkey’s involvement in Somalia

15. Islamization, Arabization and the Break-Up of the Sudan

is Associate Professor at the Centre for African Studies, Department of Middle Eastern Studies, University of West Bohemia in Pilsen, Czech Republic.