The Franks in Outremer
Studies in the Latin Principalities of Palestine and Syria, 1099-1187 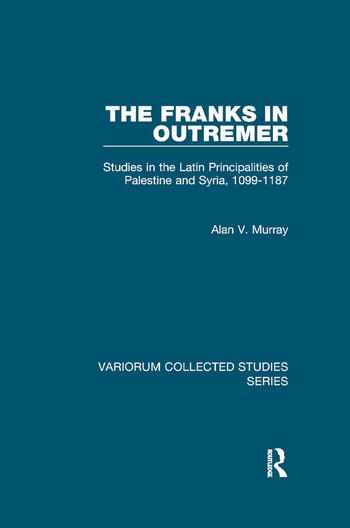 The Franks in Outremer: Studies in the Latin Principalities of Palestine and Syria, 1099-1187

This volume brings together twenty studies relating to the history of the Latin principalities established in Palestine and Syria from their foundation in the course of the First Crusade up to their defeat by Saladin at the battle of Hattin in 1187. Half of the essays deal with the first three decades of the Frankish settlement, focusing on the monarchy of the kingdom of Jerusalem under Godfrey of Bouillon, Baldwin I and Baldwin II, and on the origins and prosopography of the Frankish nobility. Beyond this are longer-ranging studies devoted to sacred and secular aspects of the landscape and population of Palestine, including the settlement of the city of Jerusalem, the military use of the relic of the True Cross, and wider strategic considerations concerning the defence of the Holy Land. The final section considers how the Franks perceived and interacted with the Muslim and native Christian inhabitants of Syria, Palestine and neighbouring lands, with a particular emphasis on the evidence of the great chronicle of William of Tyre.

Contents: Preface; The Frankish Nobility: The origins of the Frankish nobility of the Kingdom of Jerusalem, 1100-1118; A note on the origin of Eustace Grenier; A little-known member of the royal family of crusader Jerusalem in William of Malmesbury’s Gesta Regum Anglorum; Norman settlement in the Latin kingdom of Jerusalem, 1099-1131; The prosopography and onomastics of the Franks in the kingdom of Jerusalem, 1099-1187; How Norman was the principality of Antioch? Prolegomena to a study of the origins of the nobility of a crusader state. Kingship in Frankish Jerusalem: The title of Godfrey of Bouillon as ruler of Jerusalem; Daimbert of Pisa, the Domus Godefridi and the accession of Baldwin I of Jerusalem; Dynastic continuity or dynastic change? The accession of Baldwin II and the nobility of the kingdom of Jerusalem; Baldwin II and his nobles: baronial factionalism and dissent in the kingdom of Jerusalem, 1118-1134; Kingship, identity and name-giving in the family of Baldwin of Bourcq. Sacred Space and the Defence of the Holy Land: Sacred space and strategic geography in 12th-century Palestine; Constructing Jerusalem as a Christian capital: topography and population of the Holy City under Frankish rule in the 12th century; The origin of money-fiefs in the Latin kingdom of Jerusalem; ‘Mighty against the enemies of Christ’: the relic of the True Cross in the armies of the kingdom of Jerusalem. Ideologies of Confrontation: Franks, Native Christians and Muslims: Ethnic identity in the crusader states: the Frankish race and the settlement of Outremer; Coroscane: homeland of the Saracens in the Chansons de Geste and the historiography of the crusades; William of Tyre and the origin of the Turks: observations on possible sources of the Gesta orientalium principum; Biblical quotations and formulaic language in the Chronicle of William of Tyre; Franks and indigenous communities in Palestine and Syria (1099-1187): a hierarchical model of social interaction in the principalitie