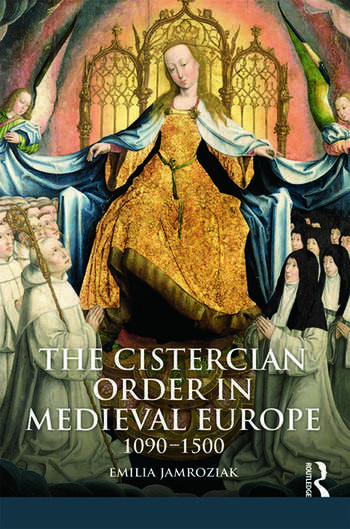 The Cistercian Order in Medieval Europe offers an accessible and engaging history of the Order from its beginnings in the twelfth century through to the early sixteenth century. Unlike most other existing volumes on this subject it gives a nuanced analysis of the late medieval Cistercian experience as well as the early years of the Order.

Jamroziak argues that the story of the Cistercian Order in the Middle Ages was not one of a ‘Golden Age’ followed by decline, nor was the true ‘Cistercian spirit’ exclusively embedded in the early texts to remain unchanged for centuries. Instead she shows how the Order functioned and changed over time as an international organisation, held together by a novel 'management system'; from Estonia in the east to Portugal in the west, and from Norway to Italy. The ability to adapt and respond to these very different social and economic conditions is what made the Cistercians so successful.

This book draws upon a wide range of primary sources, as well as scholarly literature in several languages, to explore the following key areas:

This book will appeal to anyone interested in Medieval history and the Medieval Church more generally as well as those with a particular interest in monasticism.

Emilia Jamroziak is a Senior Lecturer at the University of Leeds She has published two monographs (Rievaulx Abbey and its Social Context in 2005 and Survival and Success on Medieval Borders in 2011) and two collected volumes (Religious and Laity in Northern Europe 1000-1400 in 2007 with Janet Burton and Monasteries on the Borders of Medieval Europe in 2013 with Karen Stöber).

'As part of Routledge's "Medieval World" series, this book by historian Jamroziak (Univ. of Leeds, UK) presents a comprehensive examination of the Cistercian order in medieval Europe from its foundation to 1500...), this book is an extremely useful resource for those first delving into the Order of C'iteaux. Summing Up: Highly recommended.' - CHOICE

'This book is an extremely useful resource for those first delving into the Order of C'iteaux.' - J. M. B. Porter, Butler University

“[Jamroziak’s] study is unusually strong in its inclusion of Cistercians on the periphery of medieval Europe as well as those in the center, and the linguistic abilities that allow that to be done are impressive.” - Constance H. Berman, University of Iowa, USA

"Jamroziak's survey, the first single-authored, English-language introduction to the history of the Cistercians to be published in many decades, effectively recasts Cisterican history by treating the early and later centuries of the order's existence, and its houses throughout Europe, evenhandedly. Immersed in the scholarly literature of eastern, central, and far northern Europe as well as that of what has generally been considered the Cistercian 'heartland' of France and England, Jamroziak successfully constructs a new history of an order that repeatedly transformed itself."
Diane Reilly, Indiana University, Bloomington in Speculum

"Jamroziak's source material ranges across the breadth of the Cistercian world, citing many examples not only from western Europe but also from the eastern European countries. This breadth of source material provides a more holistic account of the Cistercian enterprise, allowing Jamroziak to question whether the Cisterican order should not be consdiered Europe's first multinational organization."
Greg Peters in Comitatus: A Journal of Medieval and Renaissance Studies

"Emilia Jamroziak has done an excellent job bringing together recent scholarship in multiple languages, and her book provides illuminating details about Cisterican practices across Europe and throughout the Middle Ages." - Martha G. Newman, University of Texas at Austin in The American Historical Review

"The great originality of Jamroziak's work is in choosing to set aside the standard paradigm used by Lekai and and others, which is essentially an evaluative approach, judging the various phases of history in terms of rise, decline, and reform. The author also avoids the reductionist approach of many recent historians, whose dominant focus is on socio-economic realities to the exclusion of the religious dimension for whcih the monasteries were appreciated in their own time. The result is a well-balanced, multi-faceted, descriptive approach that traces Cistercian life in its first centuries in terms of change and adaptation." - Elias Dietz in Sehepunkte

"This is  a very useful addition to the Medieval World series which provides a clear introduction to some of the key themes and debates in Cistercian historiography; the range of secondary material surveyed and synthesised is impressive." - K. Sykes in English Historical Review

"Overall, this book is an enjoyale and interesting read. Moving forward from previous narratives about decline, and utilizing an impressive range of case studies, Jamroziak succeeds in her aim of showing the Cistercians to be both a trans-European order and a collection of individual communities with varied experiences... This book has the potential to become the standard English-language introduction to the Cistercians in medieval Europe." - Georgina Fitzgibbon, Nottingham Medieval Studies