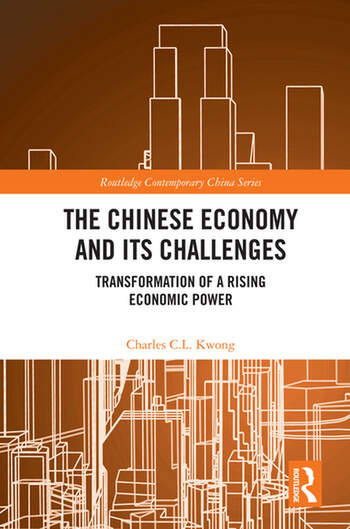 The Chinese Economy and its Challenges: Transformation of a Rising Economic Power

The remarkable transformation of the Chinese economy in terms of its structure and growth has drawn unprecedented attention from academics, policy makers and businessmen alike. In the past four decades, China swiftly transformed from a centrally-planned to a market-oriented economy, with an economic size just behind the US and ahead of Japan. Amid commendations for China's economic success offering valuable reform and growth lessons to other developing countries, underlying challenges have been emerging, which constitute long-term risks in shaking China's sustainable success. These challenges encompass a wide range of sectors and issues such as the rural-urban divide, state monopoly, policy loans in the banking sector, lack of skilled and sophisticated workers, environmental degradation, etc.

This book unveils the risks and challenges embedded in China's spectacular economic success and demonstrates that effective handling of these challenges is vital for China to avoid falling into the "middle-income trap". It is elucidated that feasible solutions are available to accommodate these risks and the clue of success lies on the willingness and ability of China's central leaders to implement further reforms. This book is a valuable reference for undergraduate and postgraduate students, academics, and public and business policy makers who are concerned about the current status and future development of the Chinese economy.

2. The Rural Economy: A Sector Lagging Behind

4. The Banking Sector: Struggle between Commercial and Policy Loans

5. China and the World: A New Form of Integration

7. A Change in Development Model: A Key to Sustained Success

8. Conclusion: Transformation and Challenges of a Rising Economic Power: From Rapid Growth to Sustained Growth

Charles C.L. Kwong is Dean and Professor of Economics, School of Arts and Social Sciences at The Open University of Hong Kong, where he concurrently serves as Director of the Public and Social Policy Research Centre. His research interest focuses on topics pertaining to institutional changes, economic development and the political economy of China. He publishes widely in international journals, and he is a regular media commentator on issues related to the Chinese economy.

"China is the second largest economy and the largest trading country in the world, contributing about 30% to the global growth annually since the financial crisis in 2008. Whether China will be able to maintain its growth momentum is important not only for China’s possibility to escape the middle-income trap but also for the stability of the world economy. This book provides insightful analyses of structural problems in Chinese economy as legacies of the gradual, piecemeal transition started in 1978 and proposes essential reforms for sustainable transformation to a high-income well-functioning market economy. I highly recommend the book to readers in academic, business and policy communities concerning the future of Chinese and world economies." — Justin Yifu Lin, Dean, New Structural Economics at Peking University, Former Chief Economist, the World Bank

"Professor Kwong is to be congratulated on writing this informative and insightful book on the Chinese economy. This book has a distinctive objective of not only analyzing the bottlenecks that China has to overcome for achieving sustained growth in future but also providing some policy solutions, viz. channeling more resources to private enterprises, improving the quality of education, and promoting innovation and technological progress. The major structural issues challenging sustained growth in China in such areas as rural development, state-owned enterprises reforms and financial sector liberalization are extremely well explained. After reading the book, we begin to see some light in how China's economic growth can be transformed from investment-driven to productivity-led."

— Edward K Y Chen, Chairman of the Board of HKU School of Professional and Continuing Education

"China’s economic success has lifted the country out of poverty and improved the livelihood of millions of its people. Now that China has reached middle-income status, the challenge is to avoid falling into the middle-income trap and get stuck at that level. Professor Kwong identifies the key bottlenecks to China’s further development, and provides a recipe for overcoming those bottlenecks to reach a more sustainable growth path. Take heed of the advice offered in this book, and there will be grounds for a cautiously optimistic outlook for the future of China."

"Charles Kwong provides a compelling and comprehensive account of China’s rise to economic superpower status. His informed commentary offers important insights into the factors that will shape the country’s – and the world’s – future development trajectory. The careful analysis and copious up-to-date statistics make the book essential reading for anyone seeking to understand the origins and implications of the economic challenges currently confronting China."

"China’s striking growth over the past four decades has drawn the world’s attention. Instead of retelling the success story of the Chinese economy, Kwong focuses sharply on the challenges and structural constraints facing China, which have posed much a downward pressure to its growth in recent years. Kwong’s scholarly work is admirable and rightfully points out the key reforms necessary for China to re-energize its growth momentum. This quality and comprehensive work is informative and essential for anyone who is interested in China’s future growth."

— Hung-Gay Fung, Dr. Y.S. Tsiang Professor of Chinese Studies and Curators’ Distinguished Professor of Finance in the Department of Finance and Legal Studies at the University of Missouri-St. Louis

"Over the last four decades China's economy has gone through a period of rapid reform, making it an important development success story. Yet, as it has reached middle-income status, new challenges have emerged. In this insightful volume on the Chinese economy, Charles Kwong carefully analyses its past successes and maps out the future challenges. It is essential reading for anyone wanting an up-to-date understanding of the world's largest economy (in PPP terms)."

"The People’s Republic of China has witnessed an unprecedented rate of economic growth since the reforms that were initiated by Deng Xiaoping in 1978 that led to the gradual opening of the economy to international commerce. Poverty in this period fell, per capita income soared and China as a nation graduated to being a superpower. The break-neck economic progress over four decades has created growth pains that Professor Charles Kwong analyses in this book. He argues convincingly for the benefits of growth to be distributed more evenly across the population, for sustainable use of natural resources, and for increased investment into human capital to raise labour productivity. Only then, Professor Kwong explains, will China be able to unshackle itself from the middle-middle trap."