The Analyst's Ear and the Critic's Eye
Rethinking psychoanalysis and literature 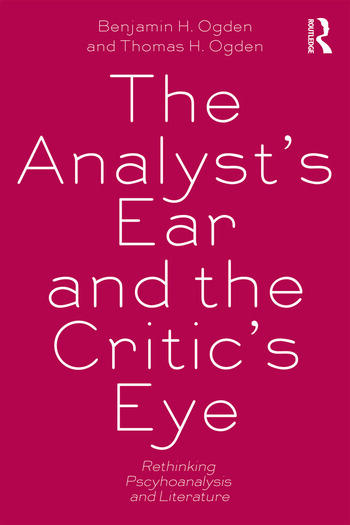 The Analyst's Ear and the Critic's Eye: Rethinking psychoanalysis and literature

The Analyst’s Ear and the Critic’s Eye is the first volume of literary criticism to be co-authored by a practicing psychoanalyst and a literary critic. The result of this unique collaboration is a lively conversation that not only demonstrates what is most fundamental to each discipline, but creates a joint perspective on reading literature that neither discipline alone can achieve.

This book radically redefines the relationship between psychoanalysis and literary studies in a way that revitalizes the conversation between the two fields. This is achieved, in part, by providing richly textured descriptions of analytic work. These clinical illustrations bring to life the intersubjective dimension of analytic practice, which is integral to the book’s original conception of psychoanalytic literary criticism. In their readings of seminal works of American and European literature, the authors address questions that are fundamental to psychoanalysis, literary studies, and the future of psychoanalytic literary criticism:

-What is psychoanalytic literary criticism?

-Which concepts are most fundamental to psychoanalytic theory?

-What is the role of psychoanalytic theory in reading literature?

-How does an analyst’s clinical experience shape the way he reads?

-How might literary critics make use of the analyst’s experience with his patients?

-What might psychoanalysts learn from the ways professional literary critics read?

This volume provides cutting edge work which will breathe new life into psychoanalytic ways of reading, free from technical language, yet drawing upon what is most fundamental to psychoanalytic theory and practice. It will be of great interest to mental health professionals, literary scholars and those studying psychoanalysis and literature.

The Analyst's Ear. How the Analyst Thinks. The Critic's Eye.

is a Supervising and Personal Analyst at the Psychoanalytic Institute of Northern California, USA. He has written numerous books and articles on psychoanalysis and literary criticism that have been translated into nineteen languages. He received the Sigourney Award in 2012.

"What does it mean to read? The Analyst’s Ear and the Critic’s Eye is a book that is probably best read backwards. Full versions or extended extracts of previously published essays on Kafka, Frost, and Philip Roth are reprinted in the appendices, and I think it helps to start with these essays before turning to the three main chapters. It would be a mistake to take the appended texts as read and, therefore, to ignore the context in which they are being re-read. In a book that is primarily concerned with engaged reading, where the interpellation of the individual as a reader may be seen as the main criterion of the book’s achievement, it is important for readers to participate actively in the reading experience."- Steven Groarke, The International Journal of Psychoanalysis

“The premise of the book is that aspects of psychoanalytic listening and reading can uniquely enhance literary criticism and, secondarily, that psychoanalysts can enhance their literary readings by knowing what academics do.” -Ellen Handler Spitz, PhD, Writer, Lecturer, University of Maryland, Baltimore County