The American Elections of 2012 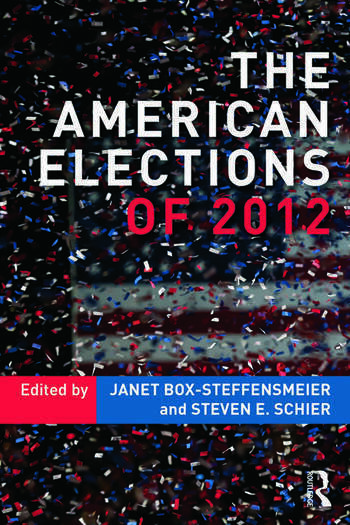 The American Elections of 2012

The 2012 American elections were highly competitive, with the unusually close partisan balance making the elections an opportunity for each of the two major parties. This book assembles leading political scientists and political journalists to explain the 2012 election results and their implications for America’s future.

In addition to assessing election results, the book examines the consequences of the large ambitions of the Obama presidency and the political and policy risks entailed in the pursuit of those ambitions. It also explores Congressional elections and policymaking since 2008, and how they affected election results in 2012. The book promises a more coherent focus than that evident in similar edited works, achieved through a limited number of chapters and clear definition of chapter content.

Janet M. Box-Steffensmeier is Vernal Riffe Professor of Political Science and Distinguished Scholar at Ohio State University, where she also serves as a professor of sociology (courtesy) and the director of the program in statistics and methodology. She has twice received the Gosnell Award for the best work in political methodology and the Emerging Scholar Award of the Elections, Public Opinion, and Voting Behavior section of the American Political Science Association. She was an inaugural fellow of the Society for Political Methodology.

Steven E. Schier is Dorothy H. and Edward C. Congdon Professor of Political Science at Carleton College in Northfield, Minnesota. He is the author or editor of 14 books, most recently Transforming America: Barack Obama in the White House (2011) and numerous scholarly articles. His analysis has appeared in the New York Times, the Washington Post, USA Today, Atlantic Magazine, and other publications.

"The 2012 election is over, but the need for definitive analysis remains. In The American Elections of 2012, editors Janet Box-Steffensmeier and Steven Schier and a group of topnotch political scientists and journalists provide that analysis and tell what the election means. Must reading for political junkies."

"This volume does everything one can ask of an analysis of the 2012 elections. Not only does it provide a very nice summary of major events, but it also weaves into that account incisive and accessible scholarship. The result is a book that covers all the proverbial bases, showcasing how contemporary political science can bring clarity and understanding to current events. Especially recommended for undergraduate courses."

"A smart look by top political scientists at how record amounts of money, new uses of technology and age-old appeals to religion helped shape the split decision of 2012, with Obama winning a second term while Republicans held control of the House. The bottom line? A ‘post-Cold War electoral order’ that presages more legislative gridlock and DC dysfunction. (Don’t miss the book’s dedication to the people of southeastern Iowa – and not because of the state’s critical caucuses.)"

"Box-Steffensmeier and Schier succeed in bringing together the insights of leading political scientists with journalistic accounts to effectively tell the story of the 2012 elections. The excitement and the give-and-take of the 2012 contests permeates every chapter, but each chapter also effectively places those events into the broader understanding of elections. The result is an excellent book for either introductory or advanced undergraduate courses."