The Adaptation Industry
The Cultural Economy of Contemporary Literary Adaptation 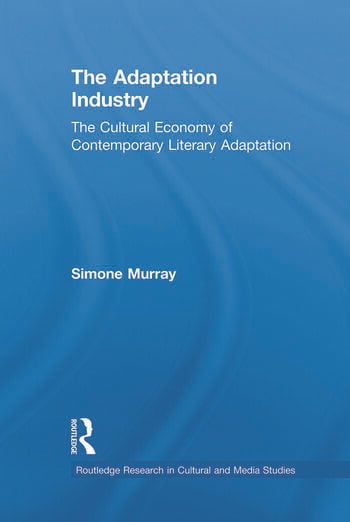 The Adaptation Industry: The Cultural Economy of Contemporary Literary Adaptation

Adaptation constitutes the driving force of contemporary culture, with stories adapted across an array of media formats. However, adaptation studies has been concerned almost exclusively with textual analysis, in particular with compare-and-contrast studies of individual novel and film pairings. This has left almost completely unexamined crucial questions of how adaptations come to be made, what are the industries with the greatest stake in making them, and who the decision-makers are in the adaptation process. The Adaptation Industry re-imagines adaptation not as an abstract process, but as a material industry. It presents the adaptation industry as a cultural economy of six interlocking institutions, stakeholders and decision-makers all engaged in the actual business of adapting texts: authors; agents; publishers; book prize committees; scriptwriters; and screen producers and distributors. Through trading in intellectual property rights to cultural works, these six nodal points in the adaptation network are tightly interlinked, with success for one party potentially auguring for success in other spheres. But marked rivalries between these institutional forces also exist, with competition characterizing every aspect of the adaptation process. This book constructs an overdue sociology of contemporary literary adaptation, never losing sight of the material and institutional dimensions of this powerful process.

Contents  Acknowledgements  List of Figures  Introduction  1: What Are You Working On?: The Expanding Role of the Author in an Era of Cross-media Adaptation  2: World Rights: Literary Agents as Brokers in the Contemporary Mediasphere  3: Making Words Go Further: Book Fairs, Screen Festivals and Writers’ Weeks as Engine-rooms of Adaptation  4: The Novel Beyond the Book: Literary Prize-winners on Screen  5: Best Adapted Screenwriter?: The Intermedial Figure of the Screenwriter in the Contemporary Adaptation Industry  6: Cultivating the Reader: Producer and Distributor Strategies for Converting Readers into Audiences  Afterword: Restive Audiences and Adaptation Futures  Notes  Bibliography  Index

"Simone Murray’s book makes good on its promise to materialize adaptation studies.  Murray frees the study of adaptation from its most persistent and constraining orthodoxies: the reliance on text-based analysis, the preoccupation with issues of fidelity, the privileging of individual over institutional agency. The Adaptation Industry gives us the first systematic examination of the way adaptations are produced: not as versions or translations of an original, nor as mere mediations between properly artistic fields of practice, but as a cultural form in their own right – and one whose ascendency in our time has not, until now, been at all adequately appreciated. This is a game-changing book which no one interested in cultural theory or the contemporary narrative arts can afford to ignore." - James F. English, University of Pennsylvania, USA

"This book is the culmination of Murray's investigations and a powerful argument for reconfiguration of scholarly practice in studying the convergent media industry within which adaptation is practiced. It is informed by her close industrial observation and traces the roles of the six stakeholder groups she identifies: authors, agents, publishers, festival directors, literary prize-giving committees and film producers and distributors." - Frances Bonner, Script and Print

"Murray's book offers a timely sociology and a political economy of the industry-topics that have been touched upon by scholars, yet, never so thoroughly or in such satisfying detail. As such, it provides an excellent and very useful synopsis of how we got here, as well as a platform for moving forward to a study of the industry that gives us the adaptations that are raison d'etre for what we do."- Joyce Goggin, Adaptation (international journal)

"Murray has provided a compelling conceptual framework and richly-described account of the contemporary cultural economy. In particular, she dispenses with the notion that the prestige of the original work of fiction and the commercial success of its screen adaptation are somehow separate or at odds. Anyone with any lingering misconceptions about the often symbiotic relationship between economic and symbolic capital in the cultural field needs to read The Adaptation Industry-now." -Casey Brienza, London School of Economics Review of Books

"Murray’s key point is thought-provoking. With literary material now being produced in multifaceted ways, authorial reputation can draw audiences across media platforms in ways that are increasingly important for cultural success.[…] Books are part of a larger media economy, and The Adaptation Industry offers astute insights into how that economy works." -David Finkelstein, Times Literary Supplement

"Simone Murray makes a major contribution to adaptation studies scholarship by developing a methodology focused on production-centered questions of how adaptations get made, rather than the field’s more traditional interest in semiotic questions of how adaptations make meaning. Her method combines facets of book history, political economy, and cultural theory to arrive at a nuanced circuit model in the vein of Robert Darnton’s famous approach to the book trade. Murray’s circuit, however, focuses on the increasing convergence of media industries in the last thirty years, chiefly with respect to book and film productions, but also with the occasional nod towards comics and video games.[…] Thanks to her hybrid method, The Adaptation Industry will prove valuable to literary and film scholars as well as cultural and book historians." – Nico Dicecco, Simon Fraser University

"Murray's work is designed to open the eyes of academics who have been trained in the worship of the book as autonomous, aesthetic reality and who still content themselves with comparing the texts with their cinematic counterparts in a sterile face-off.  The adaptation industry is indeed a reality, and a flourishing one at that...Let's not mince words: The Adaptation Industry is likely to entirely restructure this field of research and thus redeem the status of adaptation studies as the poor cousin to literary and film studies.  Several important works in the field have come out of the UK and US in recent years;...We can, however, consider Murray's The Adaptation Industry to be a pioneering work." -Jean-Louis Jeannelle, Critique