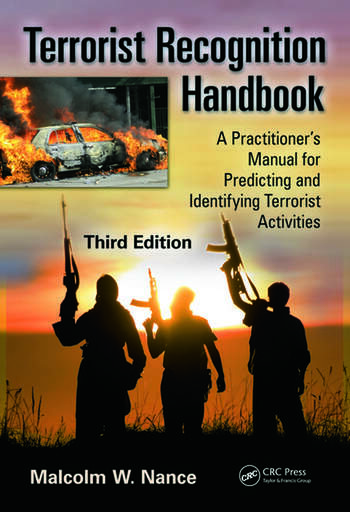 First published in 2003, Terrorist Recognition Handbook: A Practitioner's Manual for Predicting and Identifying Terrorist Activities remains one of the only books available to provide detailed information on terrorist methodology—revealing terrorist motivation, organizational structure, planning, financing, and operational tactics to carry out attacks.

This fully revised and updated third edition contains the detailed analysis and history of prior editions with completely new case studies and information on new and emerging terrorist practices and trends. Updates to the third edition include:

Written for counterterrorism practitioners who risk their lives to uncover planned attacks on civilian populations, this book will serve as a guide to train intelligence operatives, law enforcement entities, and military intelligence agents and soldiers to recognize and disrupt the various stages of developing terrorist plots.

Malcolm W. Nance is a 32-year veteran of the U.S. intelligence community’s combating terrorism program. He is a combat veteran who has served as a collections operator, analyst, and interrogator in Naval Intelligence and a specialist in antiterrorism and survival, evasion, resistance, and escape (SERE). He has spent 17 years deploying on antiterrorism and counterterrorism intelligence operations in the Balkans, Middle East, and sub-Saharan Africa in direct support to the principal agencies of the U.S. intelligence community. Mr. Nance has witnessed and investigated numerous terrorist incidents and participated in response operations from the two American embassy and U.S. Marine barracks bombings in Beirut, Lebanon; the TWA 847 hijacking; the Achille Lauro "marjacking;" the Libyan air raid; the first Gulf War; the War in the Balkans; the millennium bomb plot; the attack on the USS Cole; the September 11 attacks; and hundreds of suicide bombings and terrorist attacks in Iraq, Afghanistan, Libya and the Arabian Peninsula.

As a master SERE instructor, Mr. Nance ran the al-Qaeda simulation group for the U.S. military’s advanced terrorism, abduction, and hostage survival school from 1997 to 2001. On the morning of 9/11, he witnessed firsthand the attack on the Pentagon and became a rescuer at the crash site. In the response to the September 11 attacks. he has trained hundreds of U.S. Special Operations personnel operating in Afghanistan, Iraq, Libya, Yemen and sub-Saharan Africa in terrorism intelligence. An internationally recognized expert, author, consultant, and scholar on the al-Qaeda global terrorist organization, terror-based insurgencies, jihadist philosophy and tactics, and counter-extremist ideology and strategies he provides regular commentary for the global media including the BBC, CNN, MSNBC, FOX News, and lectures for the International Spy Museum. He lives and works between the Middle East and his home in New York.

First published in 2003, this practitioner-based handbook provides a comprehensive and detailed treatment of terrorism and counter-terrorism. Divided into six parts, the chapters cover topics such as understanding terrorism in all its manifestations, and the components of counter-terrorism. The appendices include a bibliography, a listing of terrorist groups, and a checklist of explosive components and their ingredients. The author is a consultant on counterterrorism and a retired military intelligence officer.
—Book review by Dr. Joshua Sinai appearing in Perspectives on Terrorism, Vol. 8, No. 1, 2014