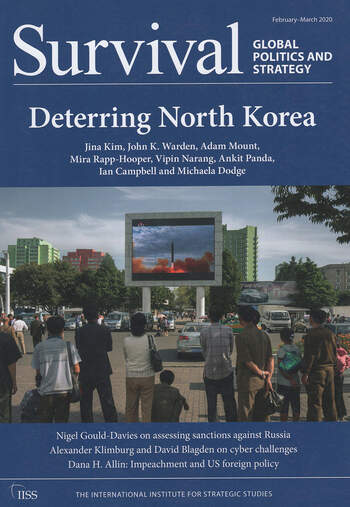 Russia, the West and Sanctions, by Nigel Gould-Davies

Nuclear Stability on the Korean Peninsula, by Adam Mount and Mira Rapp-Hooper

Noteworthy: After Soleimani – The Iran Crisis

Lessons for Negotiating with North Korea, by Edward Ifft

Political Transition on the Great Steppe: The Case of Kazakhstan, by Morena Skalamera Groce

Serbian Interests in an Independent Kosovo, by A. Ross Johnson

The Church and the Military in Russia, by Mathieu Boulègue

Russia and Eurasia, by Angela Stent

War, Conflict and the Military, by Rosa Brooks

Impeachment, Trump and US Foreign Policy, by Dana H. Allin

The Institutional Institute for Strategic Studies (IISS), a registered charity with offices in Washington, London, Manama and Singapore, is the world’s leading authority on political–military conflict. It is the primary independent source of accurate, objective information on international strategic issues. Publications include The Military Balance, an annual reference work on each nation’s defence capabilities; Strategic Survey, an annual review of world affairs; Survival, a bimonthly journal of international affairs; Strategic Comments, an online analysis of topical issues in international affairs; and the Adelphi series of books on issues of international security.