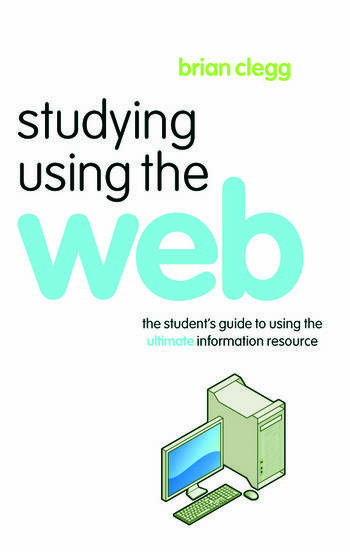 Studying Using the Web: The Student's Guide to Using the Ultimate Information Resource

Anyone can type a few keywords into a search engine. But that’s only the beginning. With Studying Using the Web you can find the right material, check its authenticity, transform it into your own original work and keep up-to-date on essential topics. The book is about how to find the right information, and making the most of it. It shows you how to:

You could stay jogging round the information track. But think how much better you could do with the right technology and skills to harness a leading-edge study machine. Move into the study fast track now.

His next books, Quantum Entanglement, on the most remarkable phenomenon of the quantum world (St Martins Press), and The Man Who Stopped Time on the motion picture pioneer Eadweard Muybridge (Joseph Henry Press/NAS), due in 2006/7. His most recent title in print, A Brief History of Infinity (Constable & Robinson) was launched with a sell-out lecture at the Royal Institution in London, and has since reached #1 position on Amazon in the general Popular Science category and topped the Amazon popular maths list for over 10 weeks. Along with further appearances at the RI he has spoken at venues from Oxford and Cambridge Universities to Cheltenham Festival of Science, has contributed to radio and TV programmes, and is a popular speaker at schools.

Brian is also editor of the successful www.popularscience.co.uk book review website and is a Fellow of the Royal Society of Arts.

In 1994 he left BA to set up his own creativity consultancy, running courses on the development of new ideas and products, and the creative solution of business problems. His clients include the BBC, the Met Office, British Airways, GlaxoSmithKline, Sony, The Treasury, Royal Bank of Scotland and many other blue-chips.

'This reader-friendly and information book offers good starting points for any school or college students wishing to learn about and make effective use of the web.' - British Journal of Educational Technology