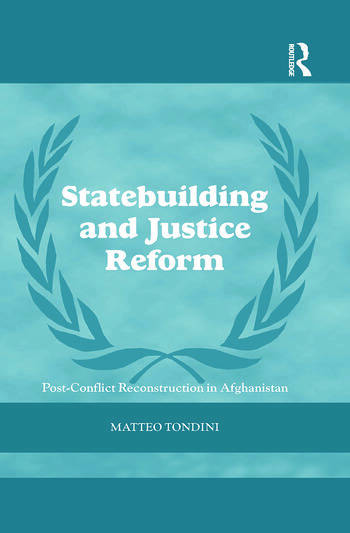 The book provides an updated account of justice reform in Afghanistan, which started in the wake of the US-led military intervention of 2001. In particular, it focuses on the role of international actors and their interaction with local stakeholders, highlighting some provisional results, together with problems and dilemmas encountered in the reform activities.

Since the mid-1990s, justice system reform has become increasingly important in state-building operations, particularly with regard to the international administrations of Bosnia, Kosovo, East Slavonia and East Timor. Statebuilding and Justice Reform examines in depth the reform of justice in Afghanistan, evaluating whether the success of reform may be linked to any specific feature or approach. In doing so, it stresses the need for development programmes in the field of justice to be implemented through a multilateral approach, involving domestic authorities and other relevant stakeholders. Success is therefore linked to limiting the political interests of donors; establishing functioning pooled financing mechanisms; restricting the use of bilateral projects; improving the efficacy of technical and financial aid; and concentrating the attention on the ‘demand for justice’ at local level rather than on the traditional supply of financial and technical assistance.

This book will be of much interest to students of Afghanistan, intervention and statebuilding, peacekeeping, and post-conflict reconstruction, as well as International Relations in general.

Matteo Tondini is a researcher and a legal advisor. He has served as a project advisor to the Embassy of Italy in Kabul, Development Cooperation Unit, working within the ‘Afghanistan Justice Program’ and has a Phd in Political Systems and Institutional Change, from the Institute of Advanced Studies, Lucca, Italy.

1. Introduction: Justice System Reform in Afghanistan  2. Reforming Public Institutions in Countries Recovering from Conflict: A Brief Overview  3. Justice Sector Reform in Countries Recovering from Conflict  4. The System of Justice in Afghanistan before the US Military Intervention of 2001  5. Phase One – From Tokyo to London: The ‘Lead Nation Approach’  6. Phase Two – From London to Paris and Beyond: Implementing the Local Ownership Principle in Justice Sector Reform  7. Conclusion

Matteo Tondini is a researcher and a legal advisor. He has served as a project advisor to the Embassy of Italy in Kabul, Development Cooperation Unit, working within the ‘Afghanistan Justice Program’ and has a Phd in Political Systems and Institutional Change, from the Institute of Advanced Studies, Lucca, Italy.

'An interesting overview of the principles governing the justice sector reform in Afghanistan and of the concerns that such a long process has been raising since its very beginning.' - Andrea Spagnolo, Military Law and the Law of War Review, Vol. 49, 3-4, 2010

'A complete and logical description and analysis of the reform of the justice sector in Afghanistan.' - Eric De Brabandere, International and Comparative Law Quarterly, Vol. 59, November 2010

'The book not only provides a good critique of statebuilding operations but also produces a novel strategy to improve the pooled financing, long-term and clearer projects and intertwines both traditional justice and local ownership over Afghan justice reform. This book is for students and policy-makers of Afghanistan interests and general students of international relations, statebuilding and post-war reconstruction and devel-opment.' - Danny Singh, University of York, Journal of Transformation & Security