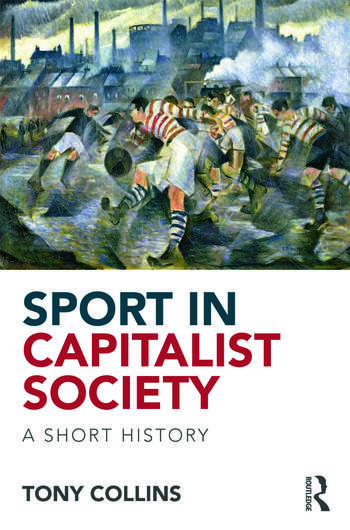 These and many other questions are answered in this new radical history of sport by leading historian of sport and society, Professor Tony Collins.

Tracing the history of modern sport from its origins in the burgeoning capitalist economy of mid-eighteenth century England to the globalised corporate sport of today, the book argues that, far from the purity of sport being ‘corrupted’ by capitalism, modern sport is as much a product of capitalism as the factory, the stock exchange and the unemployment line.

Based on original sources, the book explains how sport has been shaped and moulded by the major political and economic events of the past two centuries, such as the French Revolution, the rise of modern nationalism and imperialism, the Russian Revolution, the Cold War and the imposition of the neo-liberal agenda in the last decades of the twentieth century. It highlights the symbiotic relationship between the media and sport, from the simultaneous emergence of print capitalism and modern sport in Georgian England to the rise of Murdoch’s global satellite television empire in the twenty-first century, and for the first time it explores the alternative, revolutionary models of sport in the early twentieth century.

Sport in a Capitalist Society is the first sustained attempt to explain the emergence of modern sport around the world as an integral part of the globalisation of capitalism. It is essential reading for anybody with an interest in the history or sociology of sport, or the social and cultural history of the modern world.

Introduction  1. Capitalism and the Birth of Modern Sport  2. Class Conflict and the Decline of Traditional Games  3. Sport, Nationalism and the French Revolution  4. The Middle-Class Invention of Amateurism  5. Women and the Masculine Kingdom of Sport  6. The Victorian Sporting Industrial Revolution  7. Sport and the Age of Empire  8. Unfair Play: the Racial Politics of Sport  9. Soccer’s Rise to Globalism  10. The Second Revolution: Sport between the World Wars  11. Revolutionary Sport  12. Sex, Drugs and Sport in the Cold War  13. Taking Sides in the 1960s  14. The Revolution is being Televised  15. Winners and Losers in the New World Order  Conclusion: What Future for Sport?

Tony Collins is Professor of History and Director of the International Centre for Sports History & Culture at De Montfort University in Leicester, UK. He is the author of several books, including Rugby’s Great Split and A Social History of English Rugby Union, and was a lead consultant for the 2012 BBC Radio 4 series Sport and the British.

"The book is likely to be held in as much regard as Allen Guttmann’s earlier overarching exposition in From Ritual to Record, still widely cited after nearly three decades." – Wray Vamplew, University of Central Lancashire, Lancashire, UK. Taken from a review published in The International Journal of the History of Sport

"Sport in Capitalist Society by Tony Collins is a highly readable historical account from the mid -nineteenth century to the present day of how capitalism has served to shape sport. Victorian morality, Empire, the Cold War, globalisation and much more are each detailed in terms of how they served to change sport.Add all the insights together and a comprehensive picture of today's marketisation of sport is provided." – Mark Perryman, philosophyfootball.com