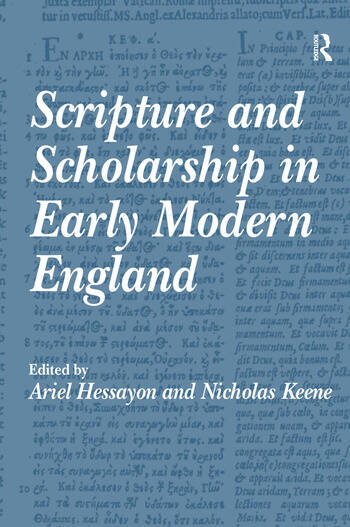 The Bible is the single most influential text in Western culture, yet the history of biblical scholarship in early modern England has yet to be written. There have been many publications in the last quarter of a century on heterodoxy, particularly concentrating on the emergence of new sects in the mid-seventeenth century and the perceived onslaught on the clerical establishment by freethinkers and Deists in the late-seventeenth and early-eighteenth century. However, the study of orthodoxy has languished far behind. This volume of complementary essays will be the first to embrace orthodox and heterodox treatments of scripture, and in the process question, challenge and redefine what historians mean when they use these terms. The collection will dispel the myth that a critical engagement with sacred texts was the preserve of radical figures: anti-scripturists, Quakers, Deists and freethinkers. For while the work of these people was significant, it formed only part of a far broader debate incorporating figures from across the theological spectrum engaging in a shared discourse. To explore this discourse, scholars have been drawn together from across the fields of history, theology and literary criticism. Areas of investigation include the inspiration, textual integrity and historicity of scriptural texts, the relative authority of canon and apocrypha, prophecy, the comparative merits of texts in different ancient languages, developing tools of critical scholarship, utopian and moral interpretations of scripture and how scholars read the Bible. Through a study of the interrelated themes of orthodoxy and heterodoxy, print culture and the public sphere, and the theory and practice of textual interpretation, our understanding of the histories of religion, theology, scholarship and reading in seventeenth-century England will be enhanced.

Contents: Notes on contributors; Introduction, Ariel Hessayon and Nicholas Keene; Og king of Bashan, Enoch and the Books of Enoch: extra-canonical texts and interpretations of Genesis 6:1-4, Ariel Hessayon; The Genesis narrative in the circle of Robert Hooke and Francis Lodwick, William Poole; Moral tales at the hearth: Jephthah's daughter in the 17th century, Nicholas Cranfield; English scholarship and the Greek text of the Old Testament, 1620-1720: the impact of Codex Alexandrinus, Scott Mandelbrote; 'A two-edged sword': biblical criticism and the New Testament Canon in early modern England, Nicholas Keene; 'To us there is but one God, the Father': antitrinitarian textual criticism in 17th- and early 18th-century England, Stephen D. Snobelen; Friendly criticism: Richard Simon, John Locke, Isaac Newton and the Johannine Comma, Rob Iliffe; Thomas Beverley and the 'Late Great Revolution': English apocalyptic expectation in the late 17th century, Warren Johnston; The ghost in the marble: Jeremy Taylor's Liberty of Prophesying (1647) and its readers, Nicholas McDowell; Iconisms, enthusiasm and Origen: Henry More reads the Bible, Sarah Hutton; 'Directions for the profitable reading of the Holy Scriptures': biblical criticism, clerical learning and lay readers, c 1650-1720, Justin Champion; 'I resolved to give an account of most of the persons mentioned in the Bible': Pierre Bayle and the prophet David in English biblical culture, Alex Barber; Afterword: the Word became flawed, John Morrill; Index.

’Altogether this book offers a fascinating [...] glimpse of how the Bible was being read in seventeenth- and eighteenth-century England, and of how it was understood as a text and a spiritual guide. These essays will contribute to a better understanding of the ways in which textual criticism, interpretation, and faith influence each other.’ Journal of Theological Studies ’Many fascinating details of early-modern biblical interpretation are touched in this collection.’ International Review of Biblical Studies ’This is, in sum, an old-fashioned book: learned, intellectually wide-ranging, elucidating, challenging and worth reading. It restores one's faith in scholarship.’ Ecclesiastical History ’Throughout the authors, emphasizing the 'shared dialog' between the radical and the mainstream, succeed brilliantly at their task in this splendid, original book.’ Anglican and Episcopal History ’... valuable collection of essays... The essayists demonstrate how vibrant the critical study of the Bible was in the so-called pre-critical era, and have made a significant contribution to the history of biblical interpretation.’ Journal for the Study of the Old Testament ’This much-needed collection of essays fills a gap. ... The volume succeeds on several fronts. [...] it focuses the reader on issues that cross literary linguistic, art historical, intellectual historical, and other boundaries... the book remains one that should be on the shelf of everyone interested in early modern England.’ Sixteenth Century Journal '... Scripture and Scholarship is an impressive, and impressively consistent, collection. All of the essays, without exception, are subtle and learned; they not only recreate long forgotten debates, explaining why disputes over texts and manuscripts were of such significance, but these disputes are also effectively contextualized, revealing clearly why biblical scholarship was at the forefront of scholarly life in the early modern perio