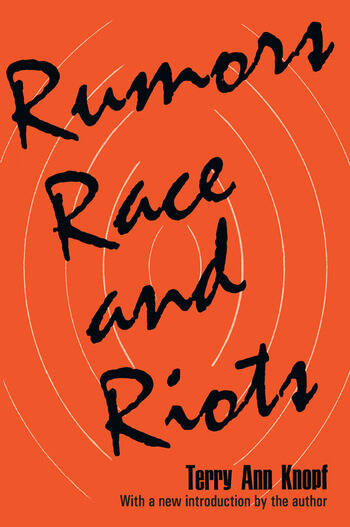 Are race-related rumors rooted in the personality traits of the individual? Are they a kind of "improvised news" for a community? Do they come and go at random or form definite, recognizable patterns? What role do the news media play in spreading rumors? These and other questions are treated in this classic study, now available in paperback with a new introduction by the author, of how and why rumors emerge in connection with racial disorders.

Included is an examination and critique of the three major models of rumor formation: the psychological approach, emphasizing the emotional needs and drives of the individual; the functional approach, which views rumors as a form of "improvised news"; and the conspiratorial approach, which sees rumors as deliberately planted and not spontaneous.

The author's "process model" of rumor formation is based on the premise that rumors cannot "cause" violence and that violence cannot "cause" rumors. Both are viewed as parts of the same process. Rumors are seen as just one of a series of determinants, each of which increases the likelihood of a collective outburst. Among the determinants examined are: conditions of stress; a rigid social structure supported by a racist ideology; and a hostile belief system (or negative set of generalized perceptions) held separately by different groups. Race-related rumors are functionally tied to the latter point and crystallize, confirm, and intensify these beliefs by linking them to actual events.

Hundreds of pertinent rumors are documented from local newspapers and investigative accounts. An exhaustive, systematic inquiry is made into the series of disorders that occurred between 1967 and 1970. The role played by rumors during these disturbing times is examined and compared to earlier periods of unrest. Implications for public policy are explored along with a hard look at rumor-control centers. The influence of the police and other public officials as well as the news media are treated extensively since they play a big part in fostering a grapevine in the white suburbs similar to the one found in the inner cities.

Terry Ann Knopf teaches arts and media criticism at Boston University's Journalism Department. Earlier, she worked as a TV critic for the Miami Herald and the Patriot Ledger, and was also a correspondent at the Boston Globe specializing in the arts and media.