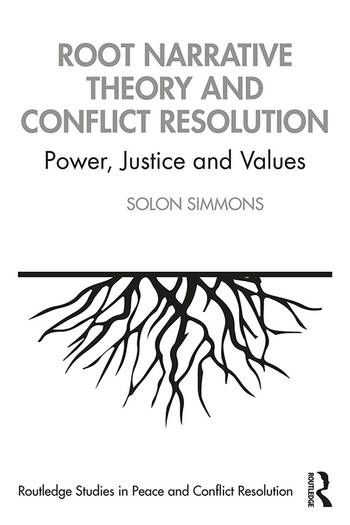 This book introduces Root Narrative Theory, a new approach for narrative analysis, decoding moral politics, and for building respect and understanding in conditions of radical disagreement.

This theory of moral politics bridges emotion and reason, and, rather than relying on what people say, it helps both the analyst and the practitioner to focus on what people mean in a language that parties to the conflict understand. Based on a simple idea—the legacy effects of abuses of power—the book argues that conflicts only endure and escalate where there is a clash of interpretations about the history of institutional power. Providing theoretically complex but easy-to-use tools, this book offers a completely new way to think about storytelling, the effects of abusive power on interpretation, the relationship between power and conceptions of justice, and the origins and substance of ultimate values. By locating the source of radical disagreement in story structures and political history rather than in biological or cognitive systems, Root Narrative Theory bridges the divides between reason and emotion, realism and idealism, without losing sight of the inescapable human element at work in the world’s most devastating conflicts.

2. Root narrative theory: Between social power and scales of justice

3. The story system: Deep structures of the moral imagination

‘Root Narrative Theory and Conflict Resolution offers a novel, wide-ranging theoretical umbrella highlighting fundamental root structures underlying a range of modern, often seemingly intractable, conflicts. Simmons weaves together an impressive array of scholarship in the service of developing a useful conceptual tool for understanding reciprocal relationships between power, conflict, and values. Readers from a variety of backgrounds will find points of agreement while engaging disparate, too often isolated, literatures.’--Steve Hitlin, The University of Iowa, USA

‘Solon Simmons promises a "big picture book," and he delivers one. Root Narrative Theory is a major advance in our understanding of radical disagreement and protracted social conflict. It offers a new way to conceptualize power in the etiology and dynamics of conflict: conflict is about the perception and experience of social power abusively and unjustly deployed. Narrative is the way individuals "story," remedy, and resist the abuse. Four iconic thinkers, Hobbes, Locke, Marx, and Fanon, illustrate forms of abuse as threats to security, liberty, equality, and dignity, and provide frameworks for a "moral politics" raised in response. Simmons builds on the moral psychology of Haidt and the family metaphor theory of Lakoff, to remind us that root narratives, however motivated by emotions or framed by cognition and metaphor, have a sociological dimension, anchored in the social ecology of institutions, social relations and structures. Empirically grounded and richly illustrated with examples drawn from an impressive array of thinkers (Arendt, Polanyi, Hayek, and Habermas, among them), and practitioners (Robespierre, Reagan, and Martin Luther King…), Simmons argues for the productive analysis of deep conflict as the unpacking of root narratives in mutual contention, and of peace, if it is to come, as the refashioning of narratives and the overcoming of legacies of abusive power.’-- Kevin Avruch, George Mason University, USA

‘Solon Simmons’ new book Root Narrative Theory and Conflict Resolution presents an incredibly thoughtful and important tool for analyzing conflict stories, particularly in the field of moral politics. However, his Root Narrative Theory is not just a diagnostic – it has practical uses for building understanding, dialogue and peace. Simmons’ arguments are drawn from political and social theory. While often discussing dense concepts, Simmons keeps the content accessible and the tone conversational. He presents a broad range of sources, ranging from the deeply philosophical to popular media, to establish the foundations of his theory. His theory introduces twelve root narratives, which he suggests form the basis of conflict discourse in modern politics. He provides numerous illustrations of each, drawing from historical texts to recent political campaigns. Simmons’ work demonstrates the inherent relationship between power, moral values, and storytelling. It is essential reading for anyone involved in politics, media, conflict resolution and peacebuilding.’--Samantha Hardy, CCI Academy, Australia

‘Solon Simmons' lively, insightful exploration of the four "root narratives" (stories that stimulate and organize our feelings about security, liberty, equality, and dignity) makes a major contribution to our understanding of what drives and shapes modern social conflicts. By linking recent discoveries about the role of narrative in conflict to key theories of social and political structure, his work opens the door to new forms of conflict resolution practice. A must read for people interested in resolving current sociopolitical and cultural conflicts.’-- Richard Rubenstein, George Mason University, USA

‘With Root Narrative Theory, Solon Simons offers an original perspective for understanding protracted conflicts. This book exhibits a stunning breadth of scope and depth of detail, drawing upon thinkers of the past for developing a moral vision of conflict resolution practice. Students, professors, and scholar-practitioners of conflict will benefit greatly from the books’ boldly creative themes that are crafted carefully through rigorous discursive analysis.’—Daniel Rothbart, George Mason University, USA

‘As a practitioner who is committed to engaging with narratives for peace, I especially appreciate this important work on Root Narratives. I believe that as peacebuilders, we have to hold ourselves to a higher standard of engaging with narratives in a way that is restorative in the public sphere and not just force upon others our own ways of making meaning in the world. Thank you Professor Simmons for this framework that is helpful in exploring our own root narratives and those of others, so we can better work for social and political change that is both healing and more effective.’ - Julia Roig, PartnersGlobal, USA