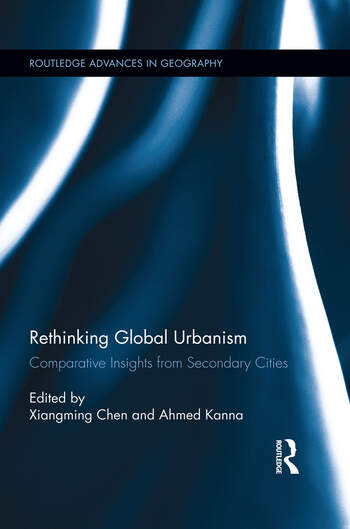 Arguing that the focus in global urban studies on cities such as New York, London, Tokyo in the global North, Mexico City and Shanghai in the developing world, and other major nodes of the world economy, has skewed the concept of the global city toward economics, this volume gathers a diverse group of contributors to focus on smaller and less economically dominant cities. It highlights other important and relatively ignored themes such as cultural globalization, alternative geographies of the global, and the influence of deeper urban histories (particularly those relating to colonialism) in order to advance an alternative view of the global city.

Preface  Tim Bunnell and James D. Sidaway.  Acknowledgments.  Introduction: Bringing the Less Familiar Cities In and Together  Ahmed Kanna and Xiangming Chen  Part I: Urban Present and Past: How Culture, History, and Politics Shape Secondary Global and Local Cityscapes  1. Competitive Globalization and Urban Change: The Allure of Cultural Strategies  Sharon Zukin  2. The Trajectories of Two "Asian Tigers": The Colonial Roots of Capitalism in Dubai and Singapore  Ahmed Kanna  3. Shaping Politics in Chinatown: The Intersection of Global Politics and Community Politics in Wartime and Cold War San Francisco  Scott H. Tang  Part II: Urban Contraction and Expansion: Economic Restructuring and Governance in De-Globalizing and Globalizing Secondary Cities  4. Staggering Job Loss, a Shrinking Revenue Base, and Grinding Decline: Springfield, Massachusetts in a Globalized Economy  Robert Forrant  5. From Cars to Casinos: Global Pasts and Local Futures in the Detroit-Windsor Transnational Metropolitan Area  Brent Ryan  6. From a Fishing Village via an Instant City to a Secondary Global City: The "Miracle" and Growth Pains of Shenzhen Special Economic Zone in China  Xiangming Chen and Tomás de’Medici  7. The Third Coming of China’s Special Economic Zones: The Rise and Regional Dimensions of Tianjin Binhai New Area  Chang Liu and Xiangming Chen  8. Social Accountability in African Cities: Comparing Participatory Budgeting in Johannesburg and Harare  Tyanai Masiya  Part III: The Contested Urban Arena: Identity and Exclusion in Secondary Cities  9. Globalization and the Construction of Identity in Two New Southeast Asian Capitals: Putrajaya and Dompak  Sarah Moser  10. Off Limits and Out of Bounds: Taxi Driver Perceptions of Dangerous People and Places in Kunming, China  Beth E. Notar  11. Seats of Difference: Coffeehouses and the Geo-economics of Gender in Contemporary Inner-City Tunis  Rodney W. Collins  12. From the "Margin of the Margins" in Salvador, Brazil: Black Women Confront the Racial Logic of Spatial Exclusion  Keisha-Khan Y. Perry  Epilogue: Second May Be Best: Theorizing the Global Urban from the Middle  Xiangming Chen and Michael Magdelinskas

Ahmed Kanna is Assistant Professor of Anthropology in the School of International Studies at the University of the Pacific and was the Raether Postdoctoral Fellow at the Center for Urban and Global Studies at Trinity College during 2008-09.

"A great collection that takes us to the next phase of global urbanism. The editors forcefully argue for the need to incorporate variables that have been mostly neglected in the extant research in this field, or are only now emerging. This opens up challenging new analytic ground." —Saskia Sassen, Columbia University, author of Territory, Authority, Rights, USA

"This volume marks a novel, even radical departure from the literature on global cities. Previous scholarship has tended to focus on a few global cities that act as financial and command centers. This volume is a departure because it takes seriously the idea that global processes are at work in cities of all sizes and in all regions of the world. In sum it offers an imaginative rethinking, just as the title promises." —Dennis R. Judd, Interim Director, Great Cities Institute Professor, Department of Political Science University of Illinois at Chicago, USA

"Rethinking Global Urbanism travels through an array of cities less often explored by urban scholars and along the way develops and reworks many significant themes in the field. The book sets the scene for inventing new approaches to cities which refuse old categorisations and demand instead that we think cities like San Francisco and Shenzhen, Tunis and Detroit, together. Historically astute but with an eye to the future of cities, this volume attends to themes such as economy and culture, governance and globalisation through wonderfully detailed city case studies but with a clear ambition to informing wider theoretical debates. This collection is an important contribution to the emerging body of work in global comparative urbanism."—Jennifer Robinson, University College London, UK

offers vibrant, refreshing dialogues about cities in a shifting global web. Going beyond the sprawling iconic metropolitan nodes that generally have dominated social science theory and analyses, the authors add complexities and shadows to diverse case studies from Johannesburg, Dubai, Shenzhen, Salvador, Detroit, San Francisco, Puttrajaya and Tianjin.  Analyses range from the trajectories of emergent, even "instant" world capitals to the strategies of older cities staving off decline; these are the cities of the future as well as the cities next door. Throughout the text, the authors bring globalization alive, whether in protests over gentrification in Brazil, the meanings of a cup of coffee at a mixed Tunisian café, the transnational politics dividing Chinatown or the ruminations surrounding the closing of a Rustbelt factory. At the same time, these multidisciplinary perspectives, carefully anchored in place, history and people, expose critical linkages among cities that challenge simple models of global hierarchy, identifying worlds within worlds that shape important urban connections.   This is a collection that should enliven classroom discussions and spur many scholars to think about richer meanings of globalization across multiple, changing cities of the 21st century.—Gary W. McDonogh, Growth and Structure of Cities, Bryn Mawr College, usa