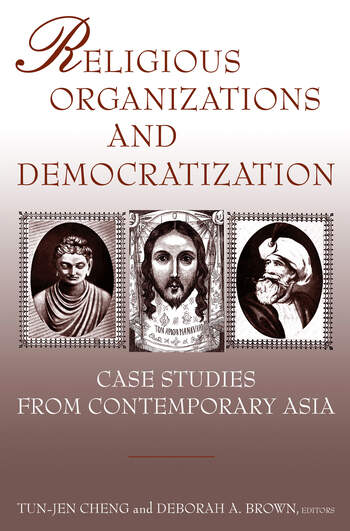 Preface; 1. Introduction: The Roles of Religious Organizations in Asian Democratization, Tun-jen Cheng and Deborah A. Brown; 2. The Falun Gong: Religious and Political Implications, Julia Ching; 3. "Buddhism for the Human Realm" and Taiwanese Democracy, Andre Laliberte; 4. New Karma: Buddhism and Democratization in Thailand, David Ambuel; 5. The Presbyterian Church in the Formation of Taiwan's Democratic Society, 1945-2004, Murray A. Rubinstein; 6. Christian Churches and Democratization in South Korea, Hyug Baeg Im; 7. The Limits of Conservative Church Reformism in the Democratic Philippines, Coeli M. Barry; 8. Hong Kong's Catholic Church and the Challenge of Democratization in the SAR, Deborah A. Brown; 9. Islam and Democratic Transition in Indonesia, Greg Barton; 10. Democracy, the "Islamic State," and Embedded Realities in Malaysia, Patricia Martinez; 11. The Soka Gakkai's Critical Role in the Rapidly Changing World of Postwar Japanese Politics, Daniel A. Metraux; About the Editors and Contributors; Index