Religious Actors in the Public Sphere
Means, Objectives, and Effects 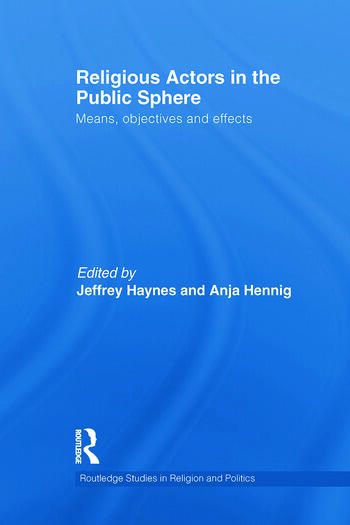 Religious Actors in the Public Sphere: Means, Objectives, and Effects

This book seeks to argue that religious actors play a crucial role in the complex processes of entering or re-entering the public spheres of state, political, and civil society. Seeking to ameliorate the analytical lacuna and concentrating on both the meso and micro levels of religious public involvement, the contributors explain how representatives from religious and political institutions act and interact in a variety of ways for various purposes.

Analysing empirical examples from both Europe and beyond, and including a variety of religions, including multi-faith platforms, the volume examines selected religious actors’ objectives, means and strategies and effects in order to address the following questions:

• What are selected religious actors’ public and/or political activities and objectives?

• In what ways and with what results do selected religious actors operate in various public spheres?

• What are the consequences of religious actors’ political involvement, and which factors condition the degree to which they are successful?

Whilst focusing mainly on Europe, the book also utilizes examples from Egypt, Turkey and the USA to provide a valuable and unique comparative focus. The contributors demonstrate that various religious actors, whether functioning as interest groups or social movements, and almost irrespective of the religious tradition to which they belong and the culture from which they emanate, do not necessarily differ markedly in terms of strategies.

This important study will be of great interest to all scholars of International Politics, Religion, and Public Policy.

Anja Hennig has a PhD in Comparative Politics from the European University Viadrina, Germany.