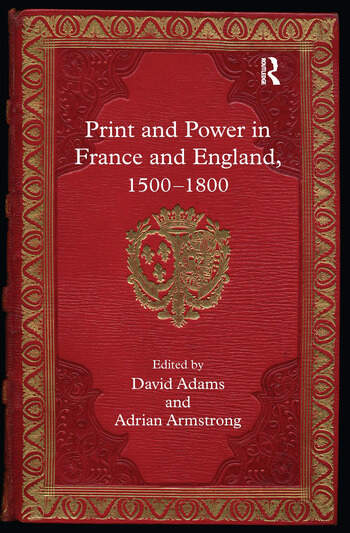 What was the relationship between power and the public sphere in early modern society? How did the printed media inform this relationship? Contributors to this volume address those questions by examining the interaction of print and power in France and England during the 'hand-press period'. Four interconnected and overlapping themes emerge from these studies, showing the essential historical and contextual considerations shaping the strategies both of power and of those who challenged it via the written word during this period. The first is reading and control, which examines the relationship between institutional power and readers, either as individuals or as a group. A second is propaganda on behalf of institutional power, and the ways in which such writings engage with the rhetorics of power and their reception. The Academy constitutes a third theme, in which contributors explore the economic and political implications of publishing in the context of intellectual elites. The last theme is clientism and faction, which examines the competing political discourses and pressures which influenced widely differing forms of publication. From these articles there emerges a global view of the relationship between print and power, which takes the debate beyond the narrowly theoretical to address fundamental questions of how print sought to challenge, or reinforce, existing power-structures, both from within and from without.

Contents: Introduction; Cosmetic surgery on Gaul: the printed reception of Burgundian writing in France before 1550, Adrian Armstrong; Immanuel Tremellius' Latin bible (1575-79) as a pillar of the Calvinist faith, Kenneth Austin; 'It was not mine intent to prostitute my muse in English': academic publication in early modern England, Sarah Knight; 'Charity', social control, and the history of English literary criticism, Lee Morrissey; Spreading the word: illustrated books as political propaganda in 17th-century France, Alison Saunders; Insinuation and instruction: public opinion in 18th-century 'letters to the printer', Ann C. Dean; Police and political pamphleteering in pre-revolutionary France: the testimony of J.-P. Lenoir, Lieutenant-Général of Police of Paris, Simon Burrows; Fancy costume and political authority in the French revolution, David Adams; Bibliography of works cited; Index.

’Adams and Armstrong's Introduction provides a useful and even-handed survey of the theoretical and historical terrain of the terms 'power' and 'discourse'...a successful comparative volume.’ Forum for Modern Language Studies ’In an intellectual climate where the benefits of interdisciplinary study are so frequently lauded, this contribution is an extremely successful example of that enterprise... Overall, this volume is a valuable and interesting contribution to our nderstanding of diverse aspects of the relationship between the printed word and power in early modern France and England.’ Modern Language Review