Prayer and Worship in Eastern Christianities, 5th to 11th Centuries 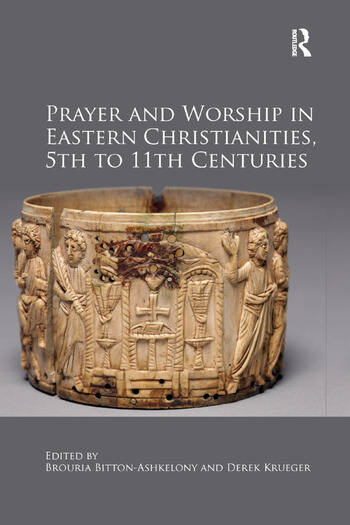 Prayer and Worship in Eastern Christianities, 5th to 11th Centuries

Prayer and Worship in Eastern Christianities, 5th to 11th Centuries forges a new conversation about the diversity of Christianities in the medieval eastern Mediterranean, centered on the history of practice, looking at liturgy, performance, prayer, poetry, and the material culture of worship. It studies prayer and worship in the variety of Christian communities that thrived from late antiquity to the middle ages: Byzantine Orthodoxy, Syrian Orthodoxy, and the Church of the East. Rather than focusing on doctrinal differences and analyzing divergent patterns of thought, the essays address common patterns of worship, individual and collective prayer, hymnography and liturgy, as well as the indigenous theories that undergirded Christian practices. The volume intervenes in standard academic discourses about Christian difference with an exploration of common patterns of celebration, commemoration, and self-discipline.

Essays by both established and promising, younger scholars interrogate elements of continuity and change over time – before and after the rise of Islam, both under the control of the Eastern Roman Empire and in the lands of successive caliphates. Groups distinct in their allegiances nevertheless shared a common religious heritage and recognized each other – even in their differences – as kinds of Christianity. A series of chapters explore the theory and practice of prayer from Greco-Roman late antiquity to the Syriac middle ages, highlighting the transmission of monastic discourses about prayer, especially among Syrian and Palestinian ascetic teachers. Another set of essays examines localization of prayer within churches through inscriptions, donations, dedications, and incubation. Other chapters treat the composition and transmission of hymns to adorn the liturgy and articulate the emotions of the Christian calendar, structuring liturgical and eschatological time.

Chapter 1 - Theories of Prayer in Late Antiquity: Doubts and Practices from Maximos of Tyre to Isaac of Nineveh

Chapter 2 - Prayer and the Body according to Isaac of Nineveh

Chapter 3 - Psalms and Prayer in Syriac Monasticism: Clues from Psalter Prefaces and their Greek Sources

Chapter 5 - Renovation and the Early Byzantine Church: Staging Past and Prayer

Chapter 6 - The Power of the Eucharist in Early Medieval Syria: Grant for Salvation or Magical Medication?

Chapter 9 - Various Orthodoxies: Feasts of the Incarnation of Christ in Jerusalem during the First Christian Millennium

Chapter 10 - The Therapy for Grief and the Practice of Incubation in Early Medieval Palestine: The Evidence of the Syriac Story of a Woman from Jerusalem

is the Joe Rosenthal Excellence Professor of Religious Studies at the University of North Carolina at Greensboro, USA.