Poverty and Inequality among Chinese Minorities 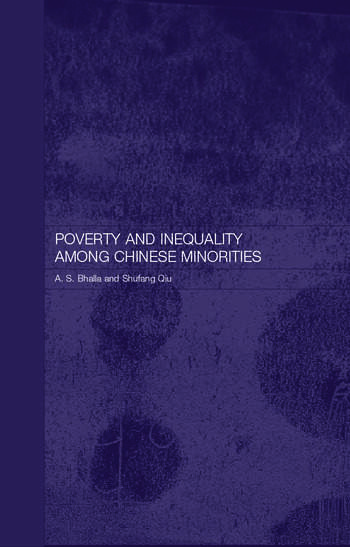 Poverty and Inequality among Chinese Minorities

The number of poor people in China is huge, despite recent economic advances. The minorities in China constitute less than ten per cent of the entire population, yet they represent forty to fifty per cent of the absolute poor. This compelling book investigates the problem of poverty and inequality in and among Chinese ethnic minorities, focusing in particular on two important questions: Have the minorities shared the fruits of spectacular economic growth in China during the past two decades? Is their backwardness due to ethnic and cultural factors or to extremely low incomes?

The authors examine the different factors explaining poverty, the relationship between poverty and ethnicity, poverty indicators that permit a comparison between minorities and non-minorities (or the Han majority), economic and demographic characteristics of minorities and their educational, occupational and gender profiles. They consider whether special measures in favour of minorities introduced by the Chinese government have contributed to an improvement in their standard of living.

Poverty and Inequality among Chinese Minorities gives original research findings and new thinking on a highly topical issue in Chinese development economics, and fills a gap in the existing economic literature.

A.S. Bhalla is a former Fellow of Sidney Sussex College, Cambridge, and former Special Adviser to the President of the International Development Research Centre (IDRC), Canada. He is co-author of Poverty and Exclusion in a Global World (1999, 2004; Japanese edition 2005) and The Employment Impact of China’s WTO Accession (2004); and author of Uneven Development in the Third World (1992, 1995).

Shufang Qiu is an Economic and Business Consultant based in Cambridge, UK. He has worked for the Chinese government on economic reforms. His research interests include poverty alleviation, WTO and economic transition in China.

‘As the first thorough study of poverty and inequality among China’s ethnic minorities …. this book is warmly to be welcomed. Bhalla already has wide experience in studying development, poverty and inequality in various parts of the world and is well placed to make comparisons. This book is thoroughly documented, not only with the extensive English-language literature but also with some Chinese sources, especially statistical data. The chapters on programmes are outstanding. There is serious attention to the problems they encountered, with also some comparisons made with South Asian countries. To my knowledge, no other treatment of these important subjects goes into anything like the depth and sensitivity found in these chapters. It is scholarly, detailed and interesting. I recommend it strongly to scholars and students with special interests either in China or in the economics of poverty and inequality. Moreover, the general reader will learn much from it as well’.

‘The authors provide an informative review and assessment of China’s anti-poverty policies and programs, focusing on the experience of Guizhou province – a province that is known for its acute absolute poverty, and with a substantial minority population, which is largely overlooked by the literature on China’.

'This book is mainly a contribution to debates about the causes of and prognosis for poverty and inequality in China generally and among minorities particularly. Its topic and much of its discussion will nevertheless appeal to readers who know little of the debates, but seek to understand why minorities account for most of the absolutely poor in China and what is being done to change that.' - BARRY SAUTMAN, China Information