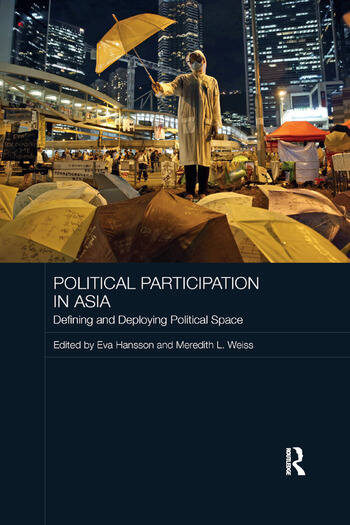 A combination of economic transformation, political transitions and changes in media have substantially, if incrementally, altered the terrain for political participation globally, particularly in Asia, home to several of the most dramatic such shifts over the past two decades.

This book explores political participation in Asia and how democracy and authoritarianism function under neoliberal economic relations. It examines changes that coincide seemingly perversely with a participation explosion: with mass street protests and ‘occupations’, energetic online contention, movements of students and workers, mobilization for and against democracy and more. Organized thematically in three parts – political participation in a ‘post-democratic’ context, changes in the scope and character of political space and the policing of that space – this book analyzes economic, regime and media shifts and how they function in tandem and both within and across states.

Closely integrated, comparative and theoretically driven, this book will be of interest to scholars and practitioners in the fields of civil society, contentious politics or social movements, democratization, political economy/development, media and communications, political geography, sociology, comparative politics and Asian politics.

Eva Hansson is a Senior Lecturer in Political Science and Coordinator of the Forum for Asian Studies, Department of Political Science, Stockholm University, Sweden, specializing in studies of democratization and/or political regime change, focused particularly on Southeast Asia. She teaches democratization, human rights and international politics. Among her publications are Growth without Democracy: Challenges to Authoritarianism in Vietnam (2011) and the edited volume, Civil Society and Authoritarianism in the Third World. She has published chapters and articles on protest movements, inequality and political regimes in Southeast Asia, as well as reports on politics and political economy.

is a Professor of Political Science at the University at Albany, State University of New York, US. She has published widely on political mobilization and contention, the politics of identity and development and electoral politics in Southeast Asia. Her books include Student Activism in Malaysia: Crucible, Mirror, Sideshow (2011) and Protest and Possibilities: Civil Society and Coalitions for Political Change in Malaysia (2006), as well as seven edited volumes, most recently, Electoral Dynamics in Sarawak: Contesting Developmentalism and Rights (with Arnold Puyok, 2017) and the Routledge Handbook of Contemporary Malaysia (2015).