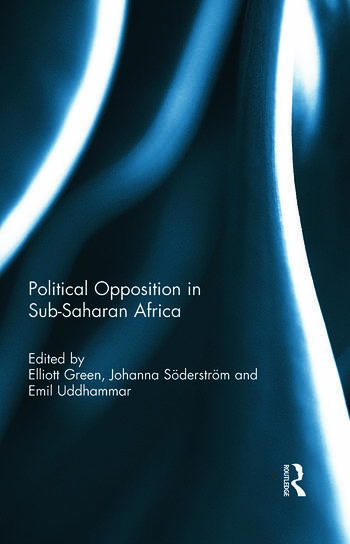 This book takes a closer look at the role and meaning of political opposition for the development of democracy across sub-Saharan Africa. Why is room for political opposition in most cases so severely limited? Under what circumstances has the political opposition been able to establish itself in a legitimate role in African politics? To answer these questions this edited volume focuses on the institutional settings, the nature and dynamics within and between political parties, and the relationship between the citizens and political parties. It is found that regional devolution and federalist structures enable political opposition to organize and gain local power, as a supplement to influence at the central level. Generally, however, opposition parties are lacking in organization and institutionalization, as well as in their ability to find support in civil society and promote the issues that voters find most important. Overall, strong executive powers, unchecked by democratic institutions, in combination with deferential values and fear of conflict, undermine legitimate opposition activity.

This book was originally published as a special issue of Democratization.

1. Political opposition and democracy in sub-Saharan Africa 2. The ANC and power concentration in South Africa: does local democracy allow for power-sharing? 3. Decentralization and political opposition in contemporary Africa: evidence from Sudan and Ethiopia 4. Institutionalizing the pro-democracy movements: the case of Zambia’s Movement for Multiparty Democracy 5. How the opposition parties in Angola and Mozambique lost the countryside 6. Parties and issues in Francophone West Africa: towards a theory of non-mobilization 7. Dissent and opposition among ex-combatants in Liberia 8. Supporting the opposition or the ruling party: stark choices in East Africa9. Effective Opposition Strategies: Collective Goods or Clientelism?

Johanna Söderström is a post-doctoral fellow at the Department of Government, Uppsala University. Her previous research on ex-combatants, peacebuilding, post-war politics and elections, focus groups and Liberia has been published in such journals as Democratization, Conflict, Security and Development, Journal of Modern African Studies, Anthropology Matters, among others.

Emil Uddhammar is a Professor of political science at Linnaeus University, Sweden. His previous research on comparative politics, development, democratization, the politics and institutions of natural resources, and political theory has been published in such journals as Decision, Review of International Political Economy, Democratization, and Transaction Press, among others.