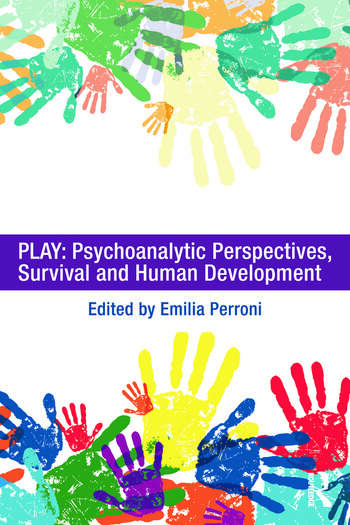 Is play only a children’s activity? How is the spontaneous play of adults expressed? What is the difference between “play” and “game”? What function does play have during war?

Play:Psychoanalytic Perspectives, Survival and Human Development explores the importance of play in the life of the individual and in society. Most people associate psychoanalysis with hidden and “negative” instincts, like sexuality and aggressiveness, very seldom with “positive urges” like the importance of love and empathy, and almost never with play. Play, which occupies a special place in our mental life, is not merely a children’s activity. Both in children and adults, the lack of play or the incapacity to play almost always has a traumatic cause – this book also shows the crucial importance of play in relation to the survival in warfare and during traumatic times.

In this book Emilia Perroni argues that whether we regard play as a spontaneous creation or whether we see it as an enjoyable activity with defined rules (a game), that it is impossible to conceive human existence and civilization without it. The papers collected in this book are the results of the research offered on the subject of play by several Israeli therapists from different psychoanalytic schools Freudian, Jungian, Kleinian, Winnicottian and Self-Psychology. Other contributions are from Israeli researchers and academics from various fields such as literature, music, art, theatre and cinema, contemporary psychoanalysis and other disciplines.

Play: Psychoanalytic Perspectives, Survival and Human Development offers new ways to think about, and understand, play as a search for meaning, and as a way of becoming oneself. This book will be of interest to psychoanalysts, researchers, therapists, parents, teachers and students who are interested in the application of psychoanalytic theory to their fields including students of cultural studies, art, music, philosophy.

Emilia Perroni is a clinical psychologist and is a supervisor at the School of Psychoanalytic Psychotherapy at the University of Tel Aviv and the Bar Ilan University. She has a private practice in Jerusalem and in Tel Aviv. She is a member of the Israeli Association of Psychoanalytic Psychotherapy and the Israeli Association of Psychotherapy, an Associate Member of the Israel Institute of Jungian Psychology and Research Fellow at the Van Leer Institute in Jerusalem.