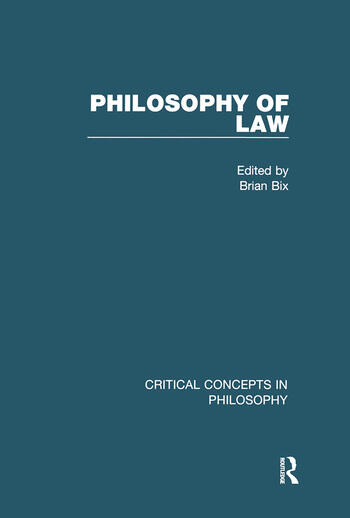 Edited by a leading scholar in the field, Philosophy of Law is a new title in the Routledge Major Works series Critical Concepts in Philosophy. It is a four-volume collection of canonical and cutting-edge research and covers a significant range of topics in the field.

The first two volumes of the collection are devoted primarily to analytical legal theory—in particular, theories about the nature of law. This is the idea of legal philosophy most familiar to jurisprudential students in the English-speaking world, and many of the civil-law countries. The last two volumes sample schools and theorists who mostly come from outside the analytical tradition, and who are, in one sense or another, critical theorists—theorists more interested in offering systematic critiques of law or general prescriptions.

The four volumes of the collection are divided into six parts. Part one brings together key work on the methodology of analytical philosophy and Part two collects the most important scholarship on forms of legal positivism, including material in the Austin–Hart tradition, ‘inclusive vs. exclusive legal positivism’ and Kelsenian legal positivism. Part three (‘Critics of Legal Positivism’) gathers material in the natural-law tradition; the work and influence of Lon Fuller and Ronald Dworkin are also fully explored here.

Parts four to six are an assembly of the best and most important thinking by and about normative and critical theorists working outside the analytical tradition. Part four gathers material under the rubric of legal realism, exploring both the American and Scandinavian schools as well as their predecessors. Part five examines one of the most influential movements in modern legal theory and legal practice: known as ‘law and economics’ or the ‘economic analysis of law’, this approach has come to dominate American scholarship, and its role is growing in other countries too. Finally, part six makes available key research on a variety of critical theories of law that have grown up around systematic critiques of Western legal systems. Included here is work by the American legal realists, as well as work by feminists and scholars pursuing critical race theory. The intersection of law and literature is also examined, as are other approaches to law and legal theory: Habermas’s ‘proceduralist paradigm’; the concept of ‘autopoiesis’; and the work of Rorty and Fish.

This Routledge Major Work illustrates the many ways in which philosophical methods and theories have been used to explore aspects of law and legal practice, and with a comprehensive introduction, newly written by the editor, which places the collected material in its historical and intellectual context, Philosophy of Law is an essential collection destined to be valued by scholars and students as a vital research resource.