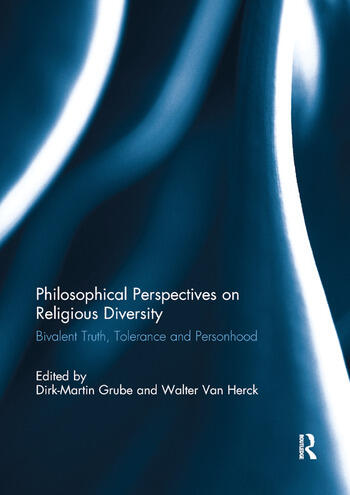 Addressing the question of what kind of theoretical foundations are required if we wish to have a constructive attitude towards different religions, this book scrutinizes aspects of the human condition, personhood and notions of (exclusive) truth and tolerance.

In the book, Wolterstorff suggests that persons have hermeneutic and related competences that account for their special dignity, and that this dignity implies the right to practice religion freely. Margolis emphasizes the contingent character of all religious pursuits – being products of a unique form of evolution, humans need to create convincing purposes in an otherwise purposeless world. Respondents criticize both views with an eye on the question of whether those views promote religious tolerance.

Grube criticizes the tendency for interreligious dialogue to be pursued under the parameters of an exclusive, bivalent notion of truth according to which something is necessarily false if it is not true. Under those parameters, religions that differ from the (one) true religion must be false. This explains why religious pluralists attempt to minimize the differences between religions at all costs and why others suggest implausibly strong concepts of tolerance. As an alternative, Grube proposes to drop exclusive concepts of truth and to conduct interreligious dialogue under the parameters of the concept of justification which allows for pluralisation. The following discussion takes up this criticism of bivalence and its consequences for dealing with religious otherness. This book was originally published as a special issue of the International Journal of Philosophy and Theology.

Dirk-Martin Grube holds the chair in Religious Diversity and the Epistemology of Theology/Religion at the Vrije Universiteit Amsterdam, The Netherlands.

is Associate Professor of Philosophy of Religion at the University of Antwerp, Belgium. He is editor-in-chief of the International Journal of Philosophy and Theology.