Orchestration
An Anthology of Writings 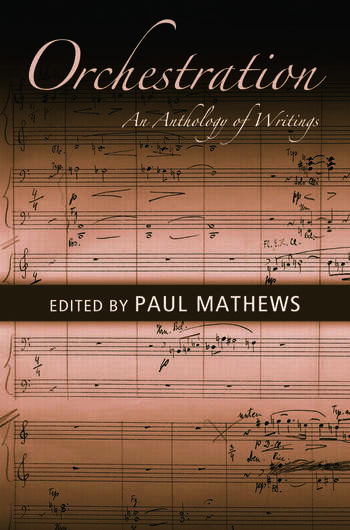 Orchestration: An Anthology of Writings

Orchestration: An Anthology of Writings is designed to be a primary or ancillary text for college-level music majors. Although there are several 'how to' textbooks aimed at this market, there is little available that traces the history of orchestration through the writings of composers themselves. By collecting writings from the ninenteenth century to today, Mathews illuminates how orchestration has grown and developed, as well as presenting a wide variety of theories that have been embraced by the leading practitioners in the field.

The collection then traces the history of orchestration, beginning with Beethoven's Orchestra (with writings by Berlioz, Wagner, Gounod, Mahler, and others), the 19th century (Mahler, Gevaert, Strauss) the fin de siecle (on the edge of musical modernism; writings by Berlioz, Jadassohn, Delius, and Rimsky Korsakov), early modern (Busoni, Schoenberg, Stravinsky, Grainger, and others), and high modern (Carter, Feldman, Reich, Brant). Many of these pieces have never been translated into English before; some only appeared in small journals or the popular press and have never appeared in a book; and none have ever been collected in one place.

The study of orchestration is a key part of all students of music theory and composition. Orchestration provides a much needed resource for these students, filling a gap in the literature.

Paul Mathews teaches at the Peabody Institute of the Johns Hopkins University where he has previously been chair of Music Theory and currently directs the music classes on the main Hopkins campus. His recent scholarship concerns the dialectic of French and German orchestration in the late nineteenth century. Mathews is also an active composer.

"Orchestration: An Anthology of Writings is a refreshing joy to read as it's filled with many treats working professionals will appreciate..." --Film Music