Mulla Sadra and Metaphysics
Modulation of Being 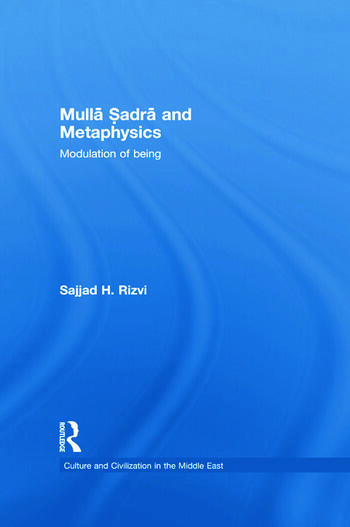 Mulla Sadra and Metaphysics: Modulation of Being

Mulla Sadra is one of the most important Islamic philosophers after Avicenna. In this exploration of his philosophy, Sajjad H. Rizvi examines the central doctrine of the modulation of being, and contextualises his work within the intellectual history of philosophical traditions in the Islamic East.

Reading and critiquing the works of Mulla Sadra from an analytical perspective, this book pays particular attention to his text the Asfar, a work which, due to its complexity, is often overlooked. Looking at the concept of philosophy as a way of life and a therapeutic practice, this book explores the paradigm of the modulation of being in the philosophical method and metaphysics of Mulla Sadra and considers its different manifestations. Rizvi relates his philosophy to larger trends and provides a review of the field, charting and critiquing the discussion on the topic to date and exploring recent thought in this direction, to show how Sadrian thought was addressed well into the 19th and 20th centuries.

Introduction  1. Methodological concerns  2. The Modulation of Being  3. The semantics of modulation of being  4. Mental Being  5. Reality and the Circle of being.  Conclusion

"Rizvi, in Mulla Sadra and Metaphysics, focuses on the heart of the whole system with a rigorous philosophical and logical analysis from the perspectives of classical Islamic philosophy and the contemporary global philosophical outlook both Western and Eastern. Moreover, on a number of issues he significantly contributes to our understanding of Sadra's philosophical system within its own authentic context. In face one must admit that many of his anlyses are full of original insights, thought provoking and thus opening new horizons to any future Sadra studies." - Alparslan Acikgenc, Journal of Shi'a Islamic Studies, Summer 2010. Vol III. No 3

"A book such as the one under review presents a refreshing contrast to the many rather mediocre works which seem to cater more for the presumed needs of undergraduate students than to a serious continuation of academic discourse... Sajjad Rizvi has presented us with a highly commendable work, essential for anyone with a deeper interest in later Islamic philosophy in general and Mulla Sadra in particular." - Jan-Peter Hartung, School of Oriental and African Studies, University of London, The Journal of JRAS, Series 3 - Volume 20/3 - 2010

"When reading a thinker like Mulla Sadra one is faced with several major difficulties at the outset: first there is the question of understanding his ontology. If one can surmount this hurdle, then one has to make sense of how Sadra treats particular problems in conversation with disciplines ranging from philosophy and theology, to Sufism and scriptural exegesis. Without passing this barrier, one may be misled into thinking that Sadra’s originality lies where it likely does not. So a great deal of historical knowledge and philosophical skill is also required in order to discern the various kinds of discourse at work in Sadra’s writings. If one can overcome this challenge and see how Sadra’s creative appropriations on any given topic fit into his worldview, then one may be able effectively to demonstrate his innovativeness and significance. Sajjad Rizvi’s Mulla Sadra and Metaphysics is indeed successful on all of these fronts. It is therefore a fine addition to the field of Islamic philosophy in general, and Sadra studies in particular." - Mohammed Rustom, Carleton University; Journal of Islamic Studies, vol 22, no 3, September 2011